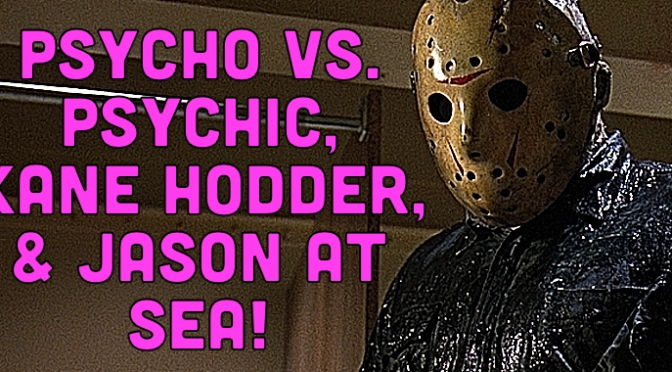 I miss being a little kid and watching a horror movie I’d never seen through unjaded eyes. Just turning off my mind, pressing play, and absorbing the wonder.

As an adult now, I sometimes catch myself being clinical and obsessive about non-issues when watching a horror flick…and I hate that. The weird thing is, I only do it when watching a recently released movie I haven’t seen. The older ones, they get a pass. It’s like respecting your elders or somethin’. I haven’t thought long enough on it to explain it better.

That being said, when I was a kid and I saw a zombie Jason facing off against a girl with psychokinetic powers – in a series that was once grounded in some sort of reality – I didn’t even bat an eyelash. Instead, I was like, “This is great!” I mean, it was.

Friday the 13th: Jason Lives was released to little fanfare – the critics actually appreciated its intelligence, but the fans weren’t feeling the meta, self-referential humor that was peppered throughout. That was two strikes in a row for the series (after the abysmal but now cult status Friday the 13th: A New Beginning), so Paramount was pretty much ready to abandon the series. This is where the initial idea of pitting Jason against Freddy Krueger started to be toyed with. But when Paramount and New Line Cinema couldn’t come to an agreement, the project was discarded. In a last ditch effort to revitalize the series, screenwriter Daryl Haney submitted a throw away idea he had: Jason versus a girl with telekinetic powers. The Associate Producer, Barbara Sachs, loved the idea: “Carrie versus Jason…That’s an interesting idea.” And so it was.

So, at this point, the series has completely gone off the rails. Jason, who drowned as a boy, came back to avenge his mother’s death but was killed off – nearly decapitated – and absent for a whole movie in the series. Then he was eventually reanimated with a lighting strike. And now he’s fighting some girl who can move objects with her mind. Believe it or not, the series would get more outlandish a few sequels later.

An important thing to note is that the film abandoned the Tommy Jarvis story arc they had spent three films (and three different actors) building. Tommy was the Samson to Jason’s Goliath. It was the beginning of a great good versus evil storyline. It’s been said that, at the time, the A Nightmare on Elm Street series was becoming the popular franchise, and so Friday was trying to co-opt some of that attention, hence the Freddy versus Jason idea. Or Jason versus Carrie, as it now was.

But with the sloughing off of Tommy Jarvis, in his spot grew back Kane Hodder – stunt man and fans most-beloved Jason Voorhees-portrayer to date.

Kane Hodder was discovered by director John Carl Buechler when they worked together on the Viggo Mortensen-starring horror flick Prison. C. J. Graham who had portrayed JV in Jason Lives (and did a great job – as great a job as someone without any lines or emotional range can do) wasn’t asked to come back. Instead, Hodder took over the role of Voorhees and it would become one that would define him. Hodder was Voorhees. I always thought this was strange: in every previous Friday film, Jason had been tall, long, lean. Almost awkward and amateur in his movements. In fact, one of the original actors hired to play Jason in Jason Lives was fired for being too “bulky”. They wanted a lanky, gangling killer. The Halloween series suffered from this same confused affliction. Go back and watch the lean, slight-framed Dick Warlock as Michael Myers in Halloween II. After that, pop in Halloween 4 and watch the bulky, boxy, wide George Wilbur do his best Michael Myers. It doesn’t make sense in either instance: both villains had been essentially living off the land, I’d assume. And Jason was (Michael probably was, too) a rotting zombie. So how do these dudes keep getting more massive? I never understood it, and I’ve never really like it. Scrawny Jason is scarier than squat thrust Jason.

This relationship between Hodder and the role of Jason would span four films, making him the only person to portray the hockey masked-goon more than once, and cement him as the definitive Jason Voorhees.

For all of its eyebrow-raising choices (the film ends when the protagonist’s dead father pops out of a lake and drags Jason down), Friday the 13th VII: The New Blood stands as a fan favorite, and is most often referred to when discussing the series.

Paramount would eventually sell the franchise to New Line Cinema, despite the entire series making over $200M on a combined sequel budget of around $20M. In Hollywood, making your budget back tenfold ain’t enough.

So where to go after Jason gets bested by the ultimate final girl? Well, Paramount wanted to bring her back for round two, but as with every other final girl they’ve had, they ditched her with the next film. So what did they decide on? Well, director Rob Hedden suggested taking Jason out of his element and sticking him in the center of the city that never sleeps. He wanted Jason to take Manhattan. Here’s what Hedden wanted to happen:

“The way I envisioned it for the first third of the movie we’d be on the boat, then we’d get to New York at the end of Act I.  Everything about New York was going to be completely exploited and milked.  There was going to be a tremendous scene on the Brooklyn Bridge, a boxing match in Madison Square Garden, Jason would go through department stores, Broadway plays.  He’d even crawl onto the top of the Statue of Liberty and dive off.”

In theory, that idea could have been cool, if not a bit much. But hell, Jason had just squared off against the psychic chick, so why not scale Lady Liberty? The one thing Rob forgot when planning this all out was the most important factor of all: The notoriously small budget each Friday the 13th film carried with it. And with only $5M to work with, there was no way Hedden was going to pull any of that stuff off. So, for the umpteenth time in the series, the end product would be one big “gotcha!” to the fans.

To say Jason “took Manhattan” would be generous. A more accurate title would have been Jason at Sea or perhaps Jason Briefly Stops in Manhattan the Last 15 Minutes of the Film. Once again, fans were short-changed; the concept far exceeded the execution, and the film did not deliver. Oh, I forgot to mention the totally bizarre, laughable ending.

So, after chasing our two leads through a sewer, Jason is doused with toxic waste. And he melts! …And then he turns into a normal, healthy boy? Huh?

When asked what it meant, director Hedden coughed out something about bringing the series “full circle”, through a big cloud of opium smoke. At least that’s what I like to think happened, because heavy drug usage is the only possible explanation for this incredibly out-of-place, strange, tacked-on ending.

It’s a shame, too, because the last 15 minutes of the film – the time Jason actual spends in New York – are great! There are a lot of wonderful scenes. When Jason stops in Times Square and looks around like some awed tourist? Great image.

There’s another great joke, too: Jason pulls a Beetlejuice move and shows some street thugs just how scary he can be.

And the posters for the film were gorgeous, too! 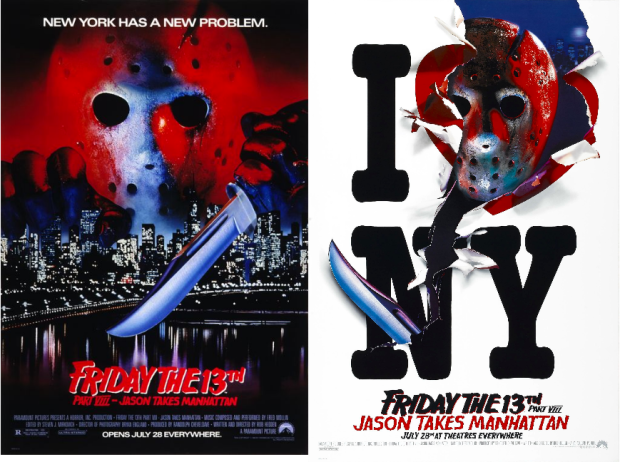 They dropped the ball on this one. But if you thought it was bad now, just wait. It gets much worse.

Join me tomorrow (on Friday the 13th!) for the conclusion to my week-long look at the Friday the 13th series: “Hellbound, Freddy’s House, & The Final Frontier”!

One thought on “Psycho vs. Psychic, Kane Hodder, & Jason at Sea!”