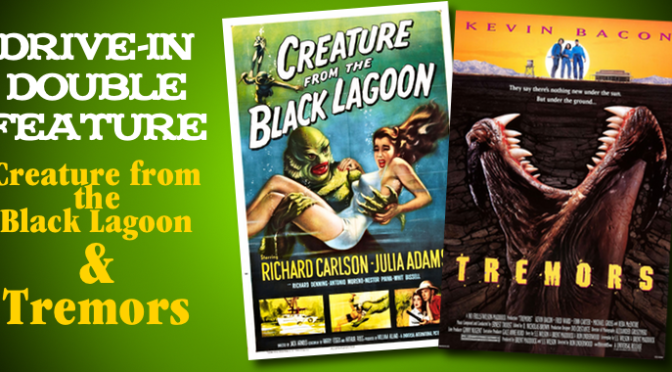 I would be lying if I said the idea to do a Drive-In Double Feature wasn’t directly inspired by something Tom Bryce does every December over at his site, Shit Movie Fest. For the last handful of years, he’s done a month-long segment around the holidays called “Shitmas” where readers submit pieces about Christmas-set horror films, retro Christmas TV shows, and general holiday weirdness nostalgia. It’s great! So in honor of the awesome “Shitmas”, I thought I’d try out a summertime version, which resulted in The Drive-In Double Feature. Tom was kind enough to not only support the idea but he also submitted a piece. Take it away, Tom!

The allure of the Drive-In Theatre is something I myself have only experienced first hand once back in the 80s when my summers were spent exclusively in Wildwood, New Jersey! The Double Feature for that particular evening was E.T. and The Goonies! Sadly I don’t really recall much about the place or even the night besides wearing my pajamas to the show and failing asleep in the back of my Dad’s Station wagon!

When Joey here at Camera Viscera asked me to take part in his “Drive-In Double Feature” idea I immediately had two movies come to mind! Both of these films I consider to be in the the top echelon of my Horror Fandom and up to this point I never got to experience either on the Big Screen! Those two choices are . . .

CREATURE FROM THE BLACK LAGOON (1954)

If you have ever visited my blog you may already know by now that I am a huge fan of Creature from the Black Lagoon! I first came to know and love the Gill-man thanks to a Monster Museum on the Wildwood Boardwalk that had a a bunch of wax figures of the Universal Monsters and other popular horror icons of the time displayed in cheesy setups! They had King Kong and Godzilla sitting on top of buildings playing cards, Dracula on a beach holding a tube of sunscreen, and then there was the Gill-Man, with a fish hook in his mouth and two oblivious fishermen in a boat in front of him not aware of what exactly they caught! Needless to say I was hooked (sorry for the lame pun) from that point on and continue to this day to seek out Gill-man related merchandise at all the Horror Movie Con I attend!
To see the Gill-man with a crowd on a nice summer night would be a dream come true!

Tremors is another movie I hold dear to my heart and think would be the perfect choice to follow the Gill-man that evening. Both movies were released by Universal Pictures, have a monster(s) who went unseen by the human eye for an undetermined amount of time, and they both feature some stunning special effects and design work that will last the test of time!

The story of Val, Earl and the Town of Perfection, Nevada battling those pesky “Graboids” is as fun as horror movies get i.m.o. and would no doubt draw a good crowd!

As I mentioned earlier in the post I still haven’t seen either of these movies on anything besides Home Media but am in luck in a couple months because “The Blobfest” which I attend every year will actually be pairing Creature (in 3D no less!) with their annual showing of The Blob!

Thanks again Joey for allowing me to take part in this fun endeavor and a special thanks to Jason Price of Icon vs Icon for creating the Creature/Tremors Poster for Me!

More Tom Bryce goodness can be found on his website, Shit Movie Fest.