In 2012, After 5 long years away from the director’s chair, ‘Splat Pack’ founding father Eli Roth announced he was stepping behind the camera once again to make The Green Inferno, his love letter to the ‘cannibal boom’ — a genre that took over Italian horror and exploitation cinema from the late-’70s to mid-’80s. This sub-genre of horror was known for it’s unrelenting brutality, unflinching violence, and in many instances the actual (and wholly unnecessary) slaughter of animals on film. It was a particularly savage and barbaric brand of horror that even the most dyed-in-the-fur horrorhound had trouble thoroughly enjoying. So who better than Roth, the godfather of “torture porn”, to take the helms and deliver a shocking and offensive kick in the butt that we, the horror moviegoing public, so desperately needed to get us out of the generic paranormal rut we’d found ourselves stuck in since he left the scene?

Alas, the finished film found itself in limbo after its distributor ran into money troubles, and there it waited indefinitely — a release date uncertain…if at all. In the meantime we sat, fidgeting, speculating the grand return of Roth and everything his mythical film had to offer. Enter Jason Blum, the indie horror producer wunderkind who, coincidentally enough, spearheaded the tidal wave of paranormal movies that began in 2007, the same year of Roth’s last release. Blum saved the day, using his Blumhouse Tilt production company to finally secure distribution for The Green Inferno. The cannibalistic gods smiled upon us!

The Green Inferno sees a group of American protestors heading deep into the jungles of the Amazon, trying to protect the tropical land from deforestation. They seem to succeed in halting the developers and celebrate their victory with beers on the plane ride home. Unfortunately, the plane crashes and the survivors soon run afoul of some sadistic savages hiding in the lush foliage. From there, the group of westerners must fight to survive, lest they wanna become the main course.

Now, viewers new to cannibal films will probably watch this movie with hands placed firmly over their eyes, occasionally peeking through the slits in their fingers. But those more familiar with the genre (dare I use the term, “fans”) will notice a few of the more shocking elements associated with the boom missing from this film, notably the real animal slaughter and the requisite rape/sexual assault scenes. Gone, too, are the inventive, stomach-turning death scenes: what horror fan isn’t familiar with the horrifying and iconic imagery of the impaled people from Cannibal Holocaust, or the hooks through the breasts and the castration scene from Cannibal Ferox? There are nods to the impaled bodies in The Green Inferno, as well as references to several other cannibal films sprinkled throughout (in fact, Cool Ass Cinema has a great list of all the movies The Green Inferno references; I highly suggest checking it out), but other than paying homage to the films that inspired it, The Green Inferno really doesn’t offer much in terms of creative and awful ways to die.

In fact, I’d argue there’s not enough violence. The words “Eli Roth directing a cannibal movie” conjures up all sorts of ideas of relentless brutality. But aside from one specific scene (which seems to be the movie’s centerpiece, and to be fair, is exceptionally brutal) most of the violence is fairy tame by today’s standards, or is obscured by fast cuts. Eli Roth said during a recent AMA that the film released to theaters is the original film he created. Apparently, the notoriously scissor-happy MPAA didn’t request any scenes to be cut. I’m amazed at both of those statements, but I’ll take it as gospel. I’ll just say: I wish it had been more violent.

One element that kinda let me down was the handling of the American group who gets attacked by the cannibals. Leading up to its release, all I read was article after article boasting how Roth was taking on “the armchair activists and the social justice warriors.” The Green Inferno was going to take these loudmouth PC college types and stick them in a place they didn’t belong and show them the consequences of being involved in a cause they ultimately truly know nothing about. Since the ultra-PC thing is really hot right now, I was amped to see Roth take this fad on. But aside from only a few painfully predictable bits of dialogue (from both the activists and the anti-activists), there really wasn’t anything that I would consider a jab at the PC crowd. And actually, I even felt bad for the group that got attacked — well, maybe one or two of ’em deserved it! But for the most part, they seemed likable enough. 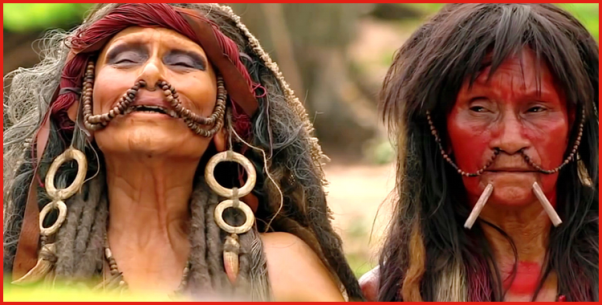 If I have one gripe, it’s with the two lead cannibals, the ones who’ve been featured prominently throughout the promotional material (y’know, nosering cataract lady and yellow-faced bald dude.) They’re so cartoonish, they look like they should be sitting in the waiting room at the end of Beetlejuice. I kept expecting the bald guy to growl “Kali-maaaaaa!” I get that they’re the lead cannibals and supposed to be scary and ‘savage’, but it coulda been toned down just a bit. The tribe of red-painted cannibals are more subtle and realistic (because they actually are a real tribe) and therefore inherently more scary.

Despite my minor criticisms, I gotta say: it’s an enjoyable flick. I was glad to see it up on the big screen, and it’s a nice respite from the glut of ghost movies we’ve been inundated with the last few years. Roth’s strange sense of humor (think the “Pancakes!” kid from Cabin Fever) occasionally slows the momentum, but hey, that’s kinda his thing — so be prepared for it. In the end, this isn’t a movie you’ll watch and then take to the police, thinking actual crimes were committed, but this is a great starting place for someone interested in the cannibal genre — and if a movie can encourage viewers to seek out the films that inspired it, that’s a win all-around.