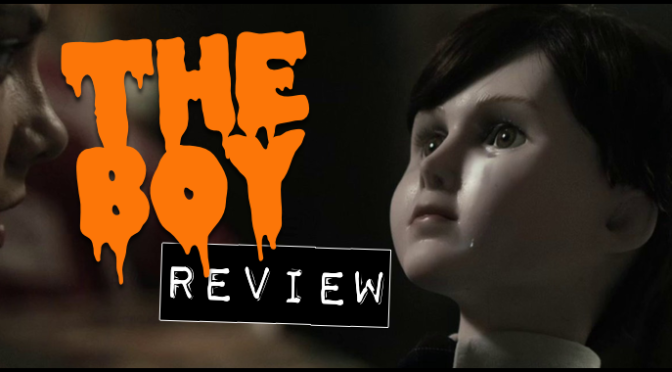 Be warned: this review is rife with SPOILERS. Normally, I avoid spoilers at all costs, but they felt almost necessary this time. Plus this movie is pretty bad, so who cares.

If I were a hacky movie critic, I’d probably start this review off by saying something like “Oh, boy.” But I’m not there, yet. Gimme a few years and I’m sure I’ll be giving Peter Travers, Rex Reed, and Gene Shalit all a run for their money. A boy can dream. Hey, lookit that!

Like a lot of modern jump-scare cash grabs The Boy has all the viable parts of a passable horror movie, it just doesn’t care about them. All that matters is getting from one jump-scare to the next, by any means necessary; story be damned, logic be damned, audience be damned. It’s a real letdown when I see a fun premise squandered by careless amateur stuff that could be avoided by just spending a little more time on the script, something as simple as one more pass before shooting it – something that would cost literally zero extra dollars.

Unfortunately for The Boy, it would take several revisions for it to make any sort of sense. In fact, they abandon logic pretty much from the get-go, and from there on it continues to unravel. It’s like someone trying to patch a hole in a sinking boat by making more holes. From one confusing decision to the next, The Boy had me constantly asking: “Why?”

The Boy opens with Greta (Lauren Cohan) being chauffeured to a desolate residence – a castle, pretty much – in England. Upon arriving, we find out that she’s there for a temporary nannying gig and, after meeting with the older couple who lives there, Greta learns that it’s not a real child she’s to look after but a doll made in the image of the couples son, Brahms, who died years earlier in a mysterious fire. Before the couple departs on vacation they leave Greta a daily to-do list, most of it involving the care for Brahms. Wake him, dress him, feed him, read to him, kiss him goodnight. You get the picture. And right as they’re leaving, they warn her, “be good to Brahms and he’ll be good to you; be bad…” And they honest to goodness don’t finish the sentence. (Though they had plenty of exposition to offer just prior to this, trust me.)

Despite being hired to handle a few effortless tasks, Greta immediately starts shirking her duties (nevermind the fact that she’s in the middle of nowhere with no Internet and has nothing but time on her hands), and soon enough strange things start happening: personal items disappear, there are bumps and noises, and all fingers point to the lifeless Brahms. In the meantime, a charming grocery delivery man named Malcolm (Rupert Evans) shows up occasionally, and Greta regales him with the ghostly happenings while he feeds her (and us) with more exposition.

Greta eventually starts taking care of Brahms (remember, the job she was hired to do) and things start evening out. She also talks to her sister on the phone a lot (we know it’s her sister because Greta looks at pictures on her phone and one is labeled something like “Best Sister Ever”. The fact that this disembodied female voice on the phone is her sister has zero relevance to anything in the movie – even zero relevance to Greta as a character – why they felt the need to devote an entire shot to reveal this cellphone picture is beyond me.) One juicy bit of info we find out is that Greta’s abusive stalker boyfriend, Cole, is out of jail. Exposition and foreshadowing! We also learn Greta is from Montana. Wait, what? She moved from Montana to England to be a temp babysitter? To escape her ex? Is she planning on living in England after the job is over, or what? I mean — huh?

Meanwhile, Greta has sort of taken to Brahms. Through some minor experimentation, she finds that the doll does actually move. She invites Malcom over to witness it, and he does, though he remains skeptical about the whole thing.

Is Brahms haunted by the ghost of his former self? Is Greta crazy? How many “just kidding it was all a dream” jump-scares can they fit into an hour and a half? (Answer: two.) The middle part of the movie is a slog that doesn’t know what to do with itself. When it’s not recycling horror movie tropes, it’s treating the audience like a bunch of braindead morons: we see Greta grow increasingly paranoid and fearful in this house…so why is she suddenly trying to pry open the attic’s dropdown ladder? It’s so that later in the movie, when Greta sees the ladder has mysteriously been let down, we’re supposed to be scared – I guess. Modern horror loves these empty callbacks. “Hey, remember how we pointed out there was an attic by having a character do something unnecessary and uncharacteristic? Well now the attic is open! Isn’t that scary?! Good thing we explicitly pointed it out earlier, or you’d probably be confused when you saw an open attic because you might not realize this house has an attic.”

Some other stuff happens*, but things really fly off the handle in the final act. Greta comes inside one night to find her ex (!), Cole, playing pool in the gameroom. Greta reacts like you’d expect: she stands there, quietly, and asks what he’s doing there. I mean — wait, what? He…tracked her down — in England — and broke inside the house, and she’s not immediately screaming or running away or calling the cops? This is the dude you flew to another continent to avoid, remember? I sure remember, because I’m watching the movie and paying attention. Like an audience is supposed to do. Anyway, Greta handles it utterly unbelievably and allows Cole to stay (!) in a guest room. In the middle of the night, Cole wakes up to dripping blood on his face; it’s from a dead rat, and someone has scrawled “Get out of here” on the wall in blood. He accuses Greta, she says it was Brahms, and Malcolm (who’d been sleeping in his car outside) charges in to see what all the commotion is about. Cole, completely over it, smashes Brahms fragile porcelain head to bits.

Suddenly, the lights start flickering and the walls start rumbling, and kaboom – a mirror explodes. Major spoilers abound folks, so iff’n you ain’t want it to be spoiled, turn back now. 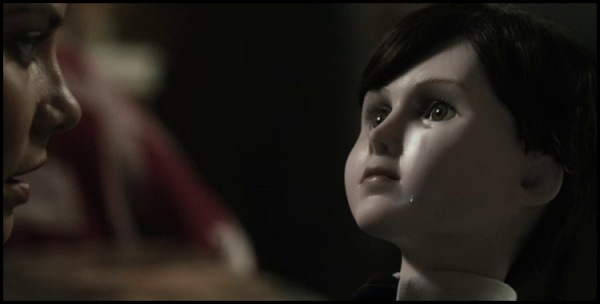 Out from the mirror climbs a full-grown Brahms, wearing a doll mask. Turns out he didn’t perish in the fire as a child. He’s just…been…living in the walls this whole time? Wait, what?

Brahms ends up killing Cole, and chasing Greta and Malcolm though the walls of the house. He injures Malcolm, but Greta – in a moment of great clarity – tries using a bit of psychology on Brahms the manchild. She orders him to bed, and he goes. (I promise all of this really happens.) While in bed, she kisses him goodnight and stabs him with a screwdriver. They wrestle, she gets away, and Brahms is left on the floor bleeding. The end. Th-th-that’s all, folks!

Perhaps most aggravating part of all this jumbled dreck is that Brahms’ reveal is hinged upon pure chance: Cole smashing the doll. Up until that point, Greta had been getting along with the doll, performing her duties and learning to enjoy the fact that the doll seemed sentient, and maybe haunted. At that point, any threat had been washed away. Brahms the doll was freaky, sure – but not dangerous. Cole’s convenient appearance and reaction only creates more questions: had Cole not shown up, and had Greta continued to care for the Brahms doll, would the real life Brahms just continued living invisibly inside the walls of the house? Also, why did Brahms try to kill Greta and Malcolm at the end? Cole, I understand: he destroyed the doll. But Greta cared for the doll, and Malcolm was indifferent at best. Wouldn’t it have been a better reveal – not to mention, made more sense – to have Brahms the manchild smash through the wall and save Greta from Cole? Imagine if Cole had started beating her when suddenly boom – Brahms to the rescue!

Also, why was Brahms wearing a doll mask? He lived in the walls, no one ever saw him, so what was the point?** Also, why a doll mask? Yes, it’s a reference to the Brahms doll, I get that, but why? It doesn’t make any sense.

Like I’ve already said, the movie was boned from Jump Street and creates more questions than it answers. The parts are there! There is so much potential in this movie (a lot of solid set-ups, occasional tension breakers, and it’s shot really well) but ultimately no one cared if any of it jibed. They didn’t care about cohesion. They just want loudboomjumpscares. I say avoid this one and instead see the identically-titled but far superior The Boy (2015) (my review). Their subject matter couldn’t be further apart, but The Boy (2015) at least treats its audience like they have half a brain.

* Lots of shit happens, man. Minor backstory stuff. And we find out that Brahms folks are actually taking a ‘permanent vacation’, if you will. But none of it ultimately matters.

** Yes, I realize Brahms has some burns on his face. This still doesn’t explain why he’d be wearing a mask while hiding in the walls of the house.