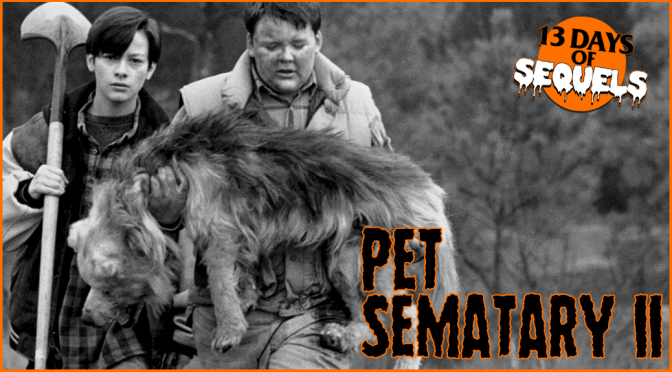 With 13 Days of Sequels I’ll be reviewing horror sequels every weekday for the last two weeks of October. You can view all entries HERE.

Also, full disclosure: this is a reprint of a piece I’d already written about Pet Sematary II, which can be found in its original format here.

It can’t be easy making a sequel.

There are so many things you have to consider when crafting a follow-up: does it continue following the ‘rules’ set forth in the original film? Does it follow those rules yet subvert expectations? Will it appease the original film’s rabid fanbase while still offering something for people new to the series? Is it bigger and better than the first, but not so much so as to make a (inevitable) third entry a moot point? There are so many things to consider, one would think to skip the sequel route altogether. But then if we did that, we’d have no Jason X, Seed of Chucky, or Jaws: The Revenge, and the world would be a lot less fun.

Pet Sematary II occasionally shows brief signs that the writers and producers did their homework and tried to create something faithful to the first film while exploring new facets of the haunted cemetery and all the powers it harnessed. But most of their creative choices are so laughably predictable, it’s almost as if they were playing a game of word association when writing the script. “The family in the first film has a cat which plays a central role to the story? Let’s make it a dog in the sequel! First film, the dad is a doctor? In the sequel he can be a veterinarian!” It’s very paint-by-numbers. And pretty silly.

The film also chokes on its own logic at several points. In Pet Sematary, it’s alluded to that if you bury something there, it comes back ‘different’ than it was when it was alive. Simply put, good people will come back evil and murderous if buried in that sour ground. Pet Sematary II tries something different — a clever twist, in my opinion — where if you bury someone evil there, they come back not so bad. This would be a great angle if they’d stuck with it, but they abandon it fairly quickly: the first a-hole they bury comes back nice (if not just “ambivalent”) but eventually devolves into a murderous psychopath. (He also becomes a sort of willing servant to Edward Furlong towards the end of the film, which just boggles the mind.) Sometimes the film just flat out doesn’t care: we’re to believe a 30-year-old Anthony Edwards is father to a 15-year-old Edward Furlong? Sure, that could happen in real life — but the reason it happens in this movie: carelessness.

If anything, Pet Sematary II suffers mostly from having too much material to work with. Pet Sematary primarily dealt with the loss of a child and the repercussions of not being able to let go – simple yet complex. Pet Sematary II is absolutely stacked with complicated, layered issues: the awfulness of adolescence and trying to fit in at a new school, being bullied, the loss of a parent, the loss of a pet, an abusive parent, step-parents, zombies. There’s no way for the movie to explore any of those topics thoroughly and justly — while maintaining constant tension — in just 100 minutes. Perhaps most puzzling of all is that both Pet Sematary and Pet Sematary II were directed by the same person, Mary Lambert!

But damn it all, I still like it! I can’t explain it, I can’t justify it. I like it in spite of itself, in spite of my better judgement and reasoning! The always incredible Clancy Brown is perfect as a prick cop who’s abusive towards his girlfriend’s son. And the once-lovable Jared Rushton, probably best known for his role as Billy Francis Kopecki in Big, stars as one of the greatest shithead high school bullies ever committed to celluloid! He’s mean as a damn snake: he makes fun of Furlong’s dead mom, threatens to kill a kitten, picks on the overweight kid. This kid terrified me when I was 8 years old. I wondered, was this how all the kids in high school were going to act? I was to find out not much later that, yeah, pretty much. And Anthony Edwards, hell — he’s just so damn enjoyable in everything. I like its autumnal setting, the small town feel.

For all its Swiss cheese logic and dated, early-90s hard rock music, there is something strangely endearing to me about Pet Sematary II. It feels like a movie I’d catch on HBO or Cinemax in the afternoon when faking sick and staying home from school – and I like that feeling!