Vern Tessio was onto something when he said, “If I could only have one food for the rest of my life? That’s easy: Pez. Cherry-flavored Pez. No question about it.” I share his opinion on the brick-shaped candies. Pez would definitely be a desert island snack for me.

What’s not to love? They’re tiny, they’re tangy, they’re tasty. Indeed, they taste like the flavors they purport to be, and they’re totally fun to eat! A candy dispenser—a different candy dispenser—with each purchase of Pez? Are you kidding? That’s like the perfect candy scenario for a kid. A dream come true.

Plus, to me, it always felt like I was eating an actual toy, like a Lego, and that stroked those innate, forbidden feelings that children have deep down—of wanting to eat a toy, but not have it do any major damage to your internal organs. Such a satisfying feeling.

If I had my pick, I’d say I’m a lemon Pez kinda guy, which is interesting as lemon is usually my last choice for candies that come in various flavors (Warheads, Sour Patch Kids, Mike and Ike, Skittles, et. al.). It just goes to show you the power of Pez. But really, all flavors of Pez are great, and I would take any one of them, any time.

The Candy Corn Pez have a strong maple scent right out of the package. Butterscotch, maybe. Definitely buttery. Waffles and syrup? Candy corn is buttery, for sure, but it has almost a marshmallow smell out of the bag.

Flavor-wise, they do a decent job of replicating the taste of candy corn, while still maintaining that signature Pez “tang”. Mostly maple, but again, heavy butter flavor, too. If you close your eyes and imagine candy corn, they do the trick. They also taste like another candy I’ve eaten before, but I cannot figure out what it is for the life of me. It’s driving me nuts! It’s particularly noticeable when I toss more than a couple Pez in the ol’ maw at one time (which is every time).

When Halloween rolls around when I’m stuck on my desert island, I’ll break out the Candy Corn Pez, for sure. 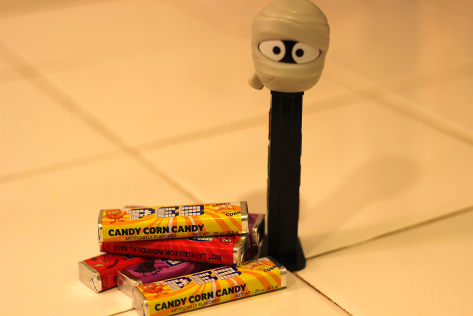