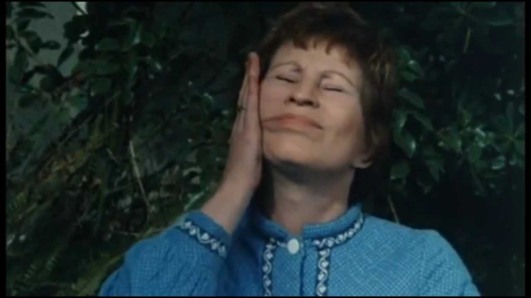 I’ve been trying to include movies that I rarely or never hear mentioned when ‘top horror’ lists are named, and Blue Sunshine is one of those films. I only recently saw it, and I really enjoyed it.

The year is 1978. Disco is in full effect, polyester is the preferred material — everything is groovy. That is, until, certain people start suffering psychotic episodes where their hair falls out and they turn into murderous maniacs. A man, Jerry (played by a pre-Skinemax fame Zalman King), is wrongly accused of one of the murders and goes on the run. While evading the authorities, he tries to get to the bottom of these psychotic episodes. He soon uncovers the cause — 10 years earlier, a group of college students had taken a bad batch of acid called Blue Sunshine that eventually leads to their mental breakdown.

It’s a great premise for a horror film as it plays on our natural, human fears (“drugs are bad!”). Plus, there’s a bit of social commentary in there: what if your late, great 60s weren’t so great after all, and something you did during the Summer of Love came back to haunt you many years later?

The movie is pretty freaky, lots of weird imagery. I don’t know what it is, as I normally don’t consider bald people or baldness itself terrifying in the least — but the bald maniacs in this film are truly unsettling. An oft overlooked gem that’s worth a watch.