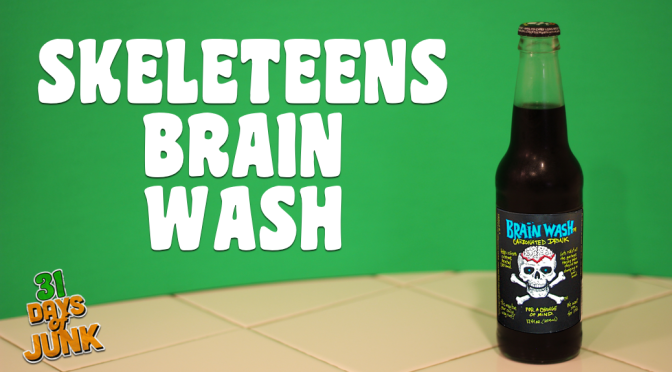 Last week I wrote about another Skeleteens soda, “Black Lemonade”. I’d tried it once in my youth, and now, over 20 years later, I was able to track it down for this #31DaysOfJunk thing I’m currently in the midst of. In fact, I tracked down all of the Skeleteens sodas I owned back then, including “Love Potion #69” and “Brain Wash”, which I’m drinking as I type this.

I wouldn’t say I’m a “craft soda” kind of person, but I wouldn’t say I’m not, either. I just don’t drink soda, so I’m sort of out of my element when it comes to fancy, micro-operation sodas. I am, however, into microbrews and craft beers so I understand the “appreciation of the product”, which I think is probably a similar approach to both craft soda and craft brews.

To me, a soda should be refreshing, thirst-quenching, and able to be slugged down in three massive gulps. I assume this is probably how most non-craft beer drinkers approach craft beer: how cheap is it, how fast can I drink it, and how drunk will it get me?

So when I try “Brain Wash”, and find it strange and spicy on my palate, and can’t immediately guzzle it down, and have to sip it, I just apply my microbrew-appreciator logic to the situation; I realize that this soda wasn’t meant to be quickly consumed or have recognizable flavors. It’s meant to be admired, enjoyed, valued—the same way I would enjoy a craft beer.

At least, I think that’s what is going on. To be honest, these sodas are way too spicy for my sensitive lil’ tum. Even sipping them leaves me with brief heartburn. After all, Brain Wash contains jalapeno oil. (No, really.) There’s a whole bunch of other herbs in the soda, most of which I’ve never heard of. What they’re supposed to do, I’m not sure. Wash my brain, apparently.

This drink comes in both a red and a blue version, and while I’m not entirely sure what the difference is, I happened to have the red version, and it’s a lovely ruby color that I’ve never seen in a soda before. I like colorful sodas; brown and clear are so boring. Gimme blue, pink, yellow, ruby. If I’m going to destroy my teeth and my pancreas, at least let me marvel at some beautiful hues while doing so! 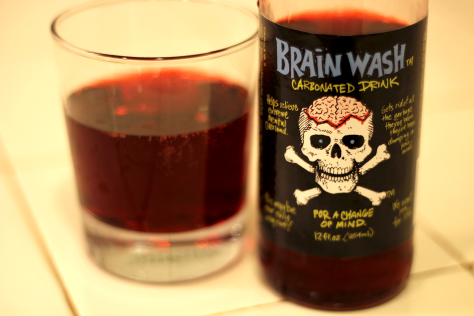