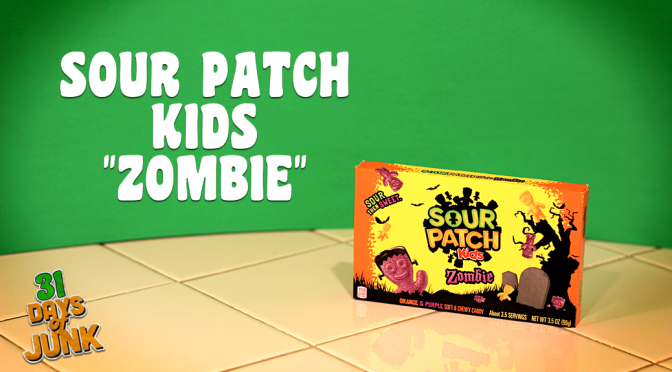 I was going to start this by saying, “Sour Patch Kids have to be one of the best modern-day candies, right?”, assuming that SPKs were no older than the late-90s at most (that’s how it always seemed to me, at least). That is, until, I looked them up and found out they’ve actually been around since the late-70s(!) and took on their current form—one meant to capitalize off of Cabbage Patch Kids—in the mid-80s.

So allow me to start this by saying: “Sour Patch Kids have to be one of the best candies in general, right?”

They’re the perfect mix between sour and gummy, and they have a weird little mascot to boot. The closest competitor I can think of (in my book) is Zours. But SPK, man, they’re just the whole package, aren’t they?

These spooky SPKs (curiously surnamed the singular “Zombie”, as in “Sour Patch Kids Zombie”) are the exact same formula as regular ol’ SPKs. This box, however, is limited to orange and purple varieties. They feel extra soft to me—softer than I am used to—but maybe I just got a weird batch.

The day after I purchased these, I discovered Sour Patch Kids Candy Corn at the store. I thought doubling up on the SPKs might be overkill, so I decided to pass, regrettably. The candy corn shape would’ve been a nice variation on the candy, as these are identical to the usual SPKs you get any time of year.

In the end, they didn’t reinvent the wheel with these, but then again they didn’t have to.