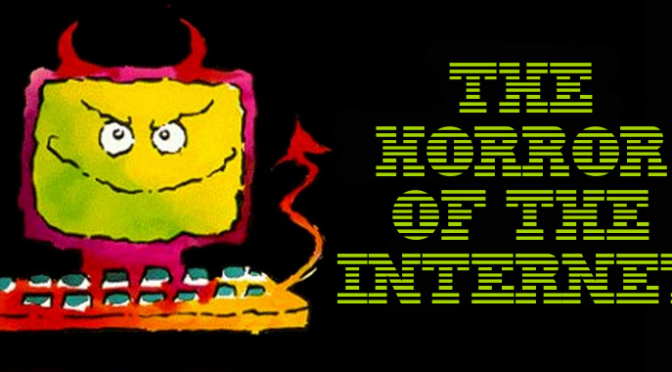 The internet has been scary ever since America’s sweetheart Sandy Bullock was thrust into danger and forced to fight for her identity and – more importantly – life in 1995’s The Net. In fact, and don’t quote me on this (unless I end up being right, of course) but, I think that may even be the first “The internet! It’s scary!” movie to be released.

Since then, as the popularity of internet-usage and Angelfire domains has grown, so has the inclusion of the internet or internet-themes in horror and suspense films. It’s a natural and understandable progression: horror has to tap into current and relevant topics and issues in order to be effective. I mean, a movie about killer polyester pants maybe wouldn’t be as effective today as it would’ve been 40 years ago. And if Lloyd Kaufman is reading this: back off – that idea is all mine.

The ‘internet is scary’ as a horror theme is still going strong today, with the soon to be released Unfriended, a film that is being proudly promoted as the first movie to take place solely through webcams – a concept which was originally used in 2012’s V/H/S, confusingly enough. That’s right: a movie named for the obsolete act of analog recording onto magnetic tape has an entire segment dedicated to live computer chat. Try to figure that one out.

Unfriended is also being deceptively promoted as ‘shot in one take’. I mean, gimme a break. For one, it just isn’t true. But also, you’re way late to the game, baby – this ain’t anything new to the genre: the Spanish horror film La Casa Muda (The Silent House) did the ‘one take’ thing in 2010, and Secuestrados (Kidnapped) (also from 2010) is composed of just 12 shots. And it ain’t anything Gaspar Noe hasn’t explored at length in his films – and effectively, I might add. But I reluctantly digress. But also, watch those movies I just mentioned.

So with this overextended FaceTime flick soon to be released, I thought I’d dust of some old classics – much in the way one would dust off an old AOL subscription disc. Sit back, sign in, and listen for the dial-up as I look back on a few films that tried to warn us how scary the internet is.

The same year The Net was released, Copycat came out. And while not technically an internet horror flick–

Alright, I take that back. It’s kind of an internet crime thriller. Sigourney Weaver plays a criminal psychologist who is left so emotionally broken after she’s attacked by a serial killer that she holes up in her hi-tech apartment and communicates with the outside world solely through her computer. Eventually, a different killer (hence the title of the film) starts harassing her via her computer and wreaking all sorts of havoc in her life. I saw this in the theater with my folks when I was 11 because I thought Harry Connick Jr. was a terrifying character in the preview. It was an early lesson in “movie previews are only there to get you in the theater, no matter how deceptive they may be.” Also: love that line from the above picture.

Long before Rob Zombie realized hard rock dudes could make super referential horror movies, Dee Snider (of Twisted Sister fame) wrote and produced Strangeland, which I think is the first chatroom-based horror film. For one of the first films based around the subject, this movie really came out guns ablazin’: a young girl and her friend are lured via chatroom to a sadistic murderer’s house, where – surprise – he tortures and kills teen girls. Although the movie was generally pretty panned, I think it took a lot of chances – or at least tried some new things, and dipped into some often unexplored themes when it comes to your standard horror flicks.

I have, admittedly (and proudly), not seen the universally hated shitfest that is Feardotcom. From the terrible title to the Stephen Dorff kiss of death, the movie seemed doomed from the start. From what I can piece together, it sounds like a mix between The Ring and Videodrome, with tons of extreme violence sprinkled in for good measure. You’d expect more from the dude who designed Michael Myers’s mask. One final thing about the atrocious title before we move on: when the movie was in pre-production, the title of the website used in the film was “fear.com”, despite the producers not owning the rights to that name. They later had to change the name to “feardotcom.com”, which is so laughably awful you wonder why they just didn’t come up with an entirely different name for the website altogether.

2002 saw the release of another terrible internet-based flick with a similarly appalling name (and another I’ve happily avoided), Swimf@n. It seems like Fatal Attraction for the web age. All I know is: 2002 was not a good year for web-based horror. Thankfully, 2005 saw two good ‘net flicks be released.

First was Hard Candy, starring a then unknown-to-American-audiences Ellen Page. This is another chat-based revenge flick which sees a creepy pedophilic photographer being lured into a trap via online chat by a tough as nails, vengeance-fueled teen. Not an outright horror flick by any means, but definitely some very unsettling scenes.

Much like both Feardotcom and Swimf@n before it, Cry_Wolf used a title choice that made it abundantly clear you were watching a movie centered around the internet. It even had an AOL tie-in promotion when it was released – And it still has an impressive and still-active website!

This film kind of capped off the “young ensemble cast being picked off by masked mystery killer” trend that Scream had kickstarted a decade earlier. By this point, remakes and paranormal films were starting to become the popular draws at the theater. I actually dig Cry_Wolf and would recommend a viewing if you’ve never seen it.

The last movie I wanna bring up is Trust. This movie should terrify anyone, whether you’re a 14 year old who plays regularly on the internet, or the parent of one. This is by no means a horror film, but considering it’s based in reality, it makes it much scarier than an unkillable dude in clown mask.

Essentially, the story focuses on a young girl who begins chatting with what she thinks is a cute boy the same age as her. They agree to meet, and it all falls apart after that. The movie not only deals with what happens in those scenarios, but the way friends and family handle the situation afterwards. It’s an icky movie that makes you hate the world a little more after watching it. And hey! Ain’t that what movies are for?

Now, there have been ‘evil computer’ movies before and since these films. Lawnmower Man, Ghost in the Machine,  and Brainscan all deal with the horror of computers on a more technological level. Hell, computers have been evil ever since HAL went kamikaze in 2001: A Space Odyssey. But if you’re lookin’ for some scary internet flicks, this list is a good place to start.

This has been Dr. Jose, warning you to change your password every 60 days and never send money to anyone in Nigeria.