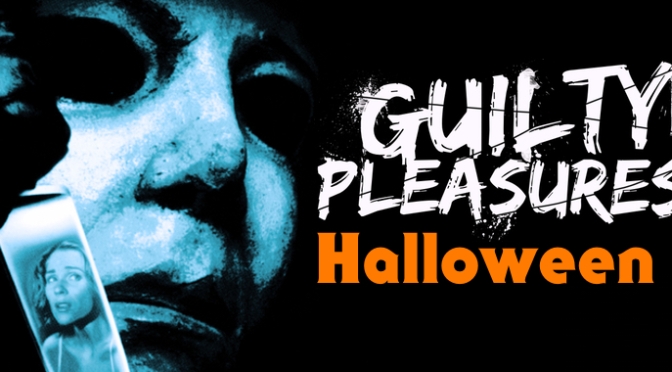 With “Guilty Pleasures”, I revisit some horror flicks that fans have almost unanimously derided and labeled “unlikeable”, but are ones that I actually get a kick out of. This time around, it’s Halloween: The Curse of Michael Myers.

The Halloween series – like all of the memorable horror franchises – has carried on long past its expiration date. It’s had 7 sequels, 2 remakes, and even tried completely omitting Michael Myers at one point early on. Since its inception, the series has never gone more than 6 years without a sequel or remake of some sort so, as we approach the 6 year anniversary of Rob Zombie’s embarrassing and confusing take on the series, it should come as no surprise that there has been talk of yet another film to add to the anthology – apparently currently in the works. And it’s this laughable-yet-strangely-admirable refusal to stay dead that has time and time again forced dunderheaded writers and money-hungry producers to make awful, knee-jerk decisions which tarnished the legacy and caused puritanical fans to overturn tables. Sure, they tried the whole ‘telepathic niece‘ angle. And, believe it or not, they even had a CGI mask at one point (I’m never forgivin’ ’em for that one.) But for all the series’s trip-ups and missteps, no entry was harder to get on the screen in one piece than Halloween: The Curse of Michael Myers (aka Halloween 6, aka Halloween 666: The Origin of Michael Myers.) They had a hell of a time finding a director: at one point or another, Peter Jackson, Scott Spiegel, Jeff Burr, and Fred Walton were all attached to direct the film – and Quentin Tarantino was even attached to produce. Take a minute to wrap your head around that. And there was also last minute script switcheroos and onset bickering between the crew, leading most involved to disown the movie and swear to never be involved in another Halloween flick again. It was that bad. I mean, hell – even ol’ Jamie Lee starred in four of ’em (including the worst in the series) so you know making Halloween 6 had to be rough. It’s unfortunate that arguments, re-writes, and re-shoots caused what could have been (according to original screenwriter Daniel Farrands) a potentially dark and revitalizing entry into a hacked-up head-scratcher (The Man in Black? The Mark of Thorn? Cults, sacrifice, druids? I mean, we’re still talking about that guy from the Illinois suburbs who killed his sis when he was a kid, right?) But dang it all. I like it! I can’t help myself! I saw this in theaters the day it came out. I was 12 years old and I went with my buddy Arnold – I had my parents buy our tickets. I had just read issue #147 of Fangoria and I was pumped, baby! And for whatever reason – despite its numerous and obvious flaws – I still enjoy it. It pays homage to the original quite a bit, which is why I think I like it so much. I’ll try to help illustrate why Halloween 6 is, sadly, the last good entry in the series. (Don’t get me started on the infuriating Halloween H20, aka Halloween Water. That’s a separate article all-together.)

Starring and introducing Paul (Stephen) Rudd. Not only is it Rudd’s debut, but it was the first time in the series that a male had become the protagonist hunted by Myers. And he plays Tommy Doyle, a character in the original 1978 film, now a full grown man obsessivly watching over the Strode house from across the street – totally great idea!

A retired Dr. Sam Loomis, hidden safely away in a cabin deep in the woods, writing his memoirs. After years of battling Myers, this is how you wanna see old Loomis living out his remaining days. (Sadly, actor Donald Pleasance would pass away before the movie’s release.)

Michael’s mask. Sure, he kinda has this Rawhead Rex thing goin’ on with his hair. But the mask is the closest thing to the original since, well, the original.

Atmosphere. Haddonfield looks dreary, empty and damp, like a town forever scarred by the memories associated with this autumnal holiday. It’s a look Halloween 4 helped to established and one I’m glad this entry reignited. Just ignore those pesky Illinois mountains in the background.

Michael is actually spooky in this! Shot mostly in shadow and under the cover of night, he definitely gives off some eerie vibes in this one.

Dr. Loomis gives one final “pure evil” speech, and though it is brief, it’s still poetry:

This force, this thing that lived inside of him came from a source too violent, too deadly for you to imagine. It grew inside him, contaminating his soul. It was pure evil. This house is sacred to him. He has all of his memories here, his rage! Mrs. Strode…I beg of you, don’t let your family suffer the same fate that Laurie and her daughter suffered.

Smashed pumpkin reference. Tommy Doyle (Rudd) causes a boy to drop his pumpkin, much like how Doyle fell on and smashed his own pumpkin in the original.

Another nice homage, using Michael’s presence in the backyard, alongside billowing white sheets on a clothesline.

This creepy old woman gives a speech about Halloween that rivals Loomis’s ‘pure evil’ speech. It ends up being a bit exposition-y and injects a little too much unnecessary backstory, but damn if it don’t start strong! But extra points for her referring to him as ‘little Mikey Myers’. (Plus, Mike in the background!)

This world class a-hole who you just know is gonna get it good. The original Halloween had a cast of bubbly teens you didn’t wanna see get killed, but every sequel from there on threw that idea out the window and made sure to have some jerk you just wanted to see get theirs (Bud in Part 2; Kelly Meeker in Part 4; pretty much everyone in Part 5, especially that little kid with the stutter.)

There’s a brief scene set at a live radio show on campus. There are people partying in costumes, barrel fires, twinkling bokehs – all being ominously narrated while we follow Rudd in slow-motion. It’s a fleeting set piece but one I really liked and wanted to see used more!

Radio host Barry Simms gets killed in his car – an homage to Annie’s demise in Halloween? I think so! Also, I’d like to point out that earlier in the film Barry makes a joke about “Michael Myers being sent to space”. Just six years later, Jason Voorhees would make that joke an awful reality.

In yet another homage, the damsel in distress runs to the neighbor’s house, banging on the door pleading for help – all while we see Michael slowly making his way across the street to her. Now that I mention it, maybe this article shoulda just been how Halloween 6 is one long homage to the original!

So it’s around this time that the movie kinda flies off the rails. The climax is set in a hospital (Halloween II, anyone?), and basically it’s just one long scene where Michael murders a boatload of doctors while strobe lights are going off – no, really. However, it’s a notable scene for one specific reason: it’s the first time since the original that you see Michael run! It’s brief – and I do mean brief – but if you look closely, Michael picks up the pace a little when chasing a doctor down some underground corridor. Michael hasn’t moved that fast since he scaled Loomis’s station wagon and escaped from Smith’s Grove!

The movie does its best to end with a ‘bang’, but goes out with more of a muted ‘poof’. The final scene sees Rudd thinking he’s beaten Michael to death with a pipe. He really wails on ol’ Mike for awhile with that thing. But after he and the other survivors leave the hospital, Dr. Loomis stays behind – only to be murdered (you can tell by his screams offscreen) by the still living Myers. It’s an entry not without its flaws, and major ones at that. But I truly feel it does a better job of honoring the original in many subtle ways than the glossy and pandering H2O does. In a way, this film was ahead of its time – maybe too ahead of its time. After all, it was written by a fan – and who better to do a horror franchise justice than its obsessive fanbase. Perhaps if the producers had just left the original script alone – and not beaten it to death with a lead pipe – we’d be singing its praises instead of cursing it.

8 thoughts on “GUILTY PLEASURES – “Halloween: The Curse of Michael Myers””