(a film she starred in) for $55M, claiming it destroyed her career.

Now, I know what you’re thinking: does her name mean “orchard of peace?” Why yes, it does!

For the 7.125 billion of you who don’t know who Paz de la Huerta is, you’re not alone. Neither did I. I mean, I’d seen her name pop up on gossip sites occasionally (I think?) or in magazines; I knew she existed. I have a friend who lives in Texas who would occasionally post on Facebook that he was at ‘Paz de la Huerta International Airport’, which I’d assumed was a joke — and after Googling it, yes, I do believe he was joking, even though the name “Paz de la Huerta” is attached to several buildings in Texas — so ultimately, I’m left even more confused about Ms. de la Huerta than I was before. Maybe I’m just an out-of-touch old fogey. I digress.

With her outrageous claim fresh in my mind, I was intrigued: I wanted to see if this movie was bad enough to ruin one’s career. Nurse 3D had been sitting in my Netflix Streaming queue for months, but I wasn’t really itchin’ to watch the thing. Alas, I plopped down and turned the sucker on.

The story centers around a nurse (if you couldn’t tell from the title) who develops an infatuation with a female co-worker. The infatuation grows and turns into this weird blackmail/stalker-type deal, and eventually it comes out that this creepy nurse is actually crazy and using a false name. Oh, and she’s been killing men for sport the whole movie.

Now, if that description didn’t make it immediately clear, the movie suffers from something a lot of bad horror films suffer from (especially recentish ones): too much going on. To me, it’s a sign: it shows a director who lacks the confidence to tell a simple, straight-forward story, and so they just throw a bunch of crazy shit at you as if that’s all it takes to make a movie interesting/scary/good. Just pile it up; bog the audience down so by the end of the movie they have no idea what the fudge is going on and leave confused — which is better than them leaving bored.

Nurse 3D starts very promising. We see a provocatively dressed Paz, slinking sexily through a nightclub and we hear her narration. She talks about how she can’t stand men who cheat, and how it’s her job to kill them and wipe that type of scum off the face of the earth. Great start, right? We see a guy notice her; he slips off his wedding ring and puts it in his pocket. He approaches Paz, buys her a drink. She turns him down and walks away. She narrates: “I always give them one last chance”, (meaning “to save their own life.”) The guy stands up and follows her outside. She kills him. Here’s why that works: He approaches her; he seeks her out; she turns him down, but he persists and seals his own fate. Unfortunately, the movie immediately abandons this solid concept and regresses into standard horror movie mush, and she ends up just killing dudes, even the ones she aggressively seduces. No longer do we empathize with her mission. It’d be like if Jason Voorhees went door to door, asking parents to send their teens to his camp.

So with its great promise abandoned, the movie devolves into typical slice and dice, with full frontal female nudity thrown in to keep watchers awake. By the end, Paz is completely batshit insane. The climax — which happens to be the best part — takes place throughout a busy hospital. It’s incredibly over-the-top. Unfortunately, since the previous 95 minutes were already cranked to an 11, the outrageous ending feels more excessive and overblown than anything. 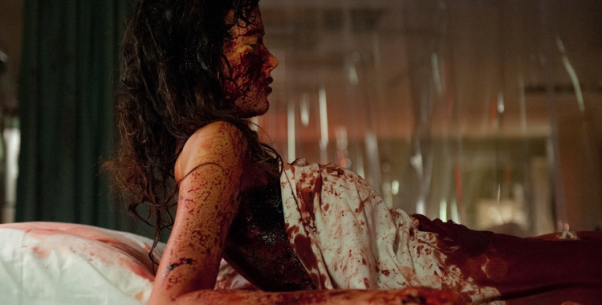 So the final verdict: could this movie ruin someone’s career? Not hardly. Leprechaun didn’t ruin Jennifer Aniston’s. Critters 3 didn’t ruin Leonardo DiCaprio’s. Attack of the Killer Tomatoes didn’t ruin George Clooney’s. And Texas Chainsaw Massacre: The Next Generation didn’t ruin Matthew McConaughey’s. Paz, this one’s on you, dollface. The weird thing is, her acting is so otherworldly and bizarre that it transcends “bad”. It’s not bad in an amateurish way; it’s like nothing I’ve ever seen. It’s cryptic and indecipherable, as if she read her lines from the Voynich Manuscript. And in a strange way, it captures your attention; you are unable to look away. It reminded me of Shelley Duval’s performance in the under-seen and absolutely incredible 3 Women.

One last thing to note: the director thought de la Huerta’s acting was so bad that he actually had another actress dub many of her lines. Normally, this wouldn’t be a problem. However, a good chunk of Paz’s lines are narration, and the actress they chose to dub her lines sounds nothing like Paz de le Huerta, so there were many times when I thought the other lead female in the movie was doing the narrating. This led me to believe there was going to be some crazy, Fight Club-type twist at the end where this second female lead and Paz would be revealed to actually be the same person. But no, it was just a bad voiceover.

In terms of “what’s the most boring profession we could film in 3D?”, this falls somewhere between Electrician 3D and Carpenter 3D. It’s a totally passable entry in the modern B-movie arena, but in the end it just doesn’t know what it wants to be: slasher, psychological thriller, or soft core Skinemax fare circa 1995. It’s currently on Netflix Streaming; check it out if you dare.