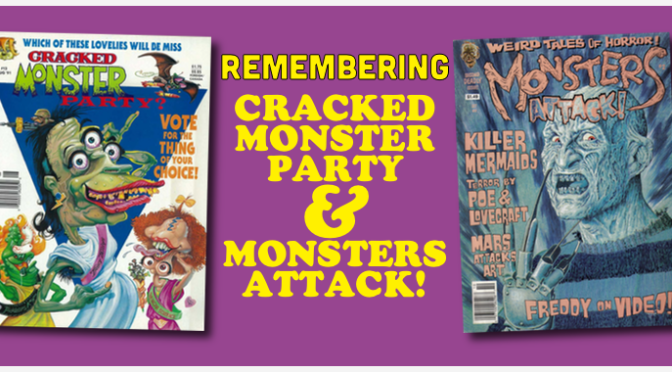 Growing up, I’d say most of the things I was consuming artistically fell under one of the four following categories: funny, gross, weird, or scary. Funny like The Three Stooges, “Weird Al”, and MAD Magazine; gross like Ren & Stimpy and Garbage Pail Kids; weird like Liquid Television and Pee-wee’s Playhouse; scary like Fangoria Magazine and the vast amount of horror flicks I watched as often as possible.

The most magical and exciting items from that nascent period were the ones that blended one or more of the aforementioned tastes. It’s hard to explain but to my developing and easily-awed brain, by combining such weird and creative preferences, it was as if someone really got it, somehow understood me personally and intimately, and was able to cater to my individual tastes. Things like the Garbage Pail Kids and Liquid Television, those were mine. Too weird and arcane to be understood or appreciated by the masses. Were other 9-year-olds enjoying those things, too? Of course. Adults, as well. But little me didn’t think that: there was no way other people — especially kids my age, my peers — could possibly be comprehending these things and enjoying them the way I was. I suppose this is the point when nostalgia starts germinating in our small bodies and turns into some sort of weird, protective ego in our adulthood. Or maybe I was just a screwball kid, who knows.

Enter, Cracked Magazine. Yes, readers under 30, before Cracked was a surprisingly successful website, it was a somewhat struggling MAD Magazine knock-off, right down to its mascot (MAD had Alfred E. Neuman; Cracked has Sylvester P. Smythe.)

But MAD Magazine wasn’t the only publication the desperate Cracked intended to pilfer ideas from. Strangely (and beautifully, to a little me) they started occasionally putting out Cracked Monster Party and Cracked Monsters Attack!, which were directly inspired by Fangoria Magazine and Famous Monsters of Filmland.

In the 60s, monster magazines were incredibly popular. The aforementioned Famous Monsters of Filmland, Monster World, Horror Monsters, Mad Monsters, Monsters Unlimited. The list is pretty endless. This is around the time Cracked debuted their first foray into monster territory, For Monsters Only. It would prove to be a popular format and would lead to two collected works, Those Cracked Monsters and the simply-titled Monsters. A bit of history is always relevant for context, but these inceptions were before my time so it’s time to talk about the ones I collected and adored: Monster Party and Monsters Attack!

Monster Party started its run in 1988; I would discover its greatness a few years later. To simply describe how happy Monster Party made me would be near impossible. Seeing my favorite horror icons being parodied and put into funny situations elated me to no end. But it wasn’t just the recognizable slashers that got toyed with. There was an evil version of Siskel and Ebert — both in zombie form — reviewing horror films while attacking each other. There was Nanny Dickering — a play on real life reporter Nancy Dickerson — interviewing Stephen King and Freddy Krueger. There were funny captions placed over scenes from old classics. Sylvester P. Smythe, Man of 1000 Faces. This was also the first place I was introduced to Dan Clowes; he wrote the incredibly gross and creative “The Uggly Family” under the pseudonym ‘Stosh Gillespie’. It was great, it was funny, and it caused my brain to explode with creative juices. My apologies for the graphic imagery.

While Monster Party was a hilarious and fun spin on all things horror-related, Monsters Attack! took a darker approach. There was little to no parody, and the pieces included didn’t feel like skits or sketches, they felt like actual stories. One specific story that is permanently branded on my brainmeat was about a child-like vampire (who in reality was hundreds of years old) preying on other schoolyard children. (Edit: it was entitled A Boy’s Life.) It was set in the 1950s. Eventually he unknowingly bites a child with polio and ends up becoming paralyzed himself, and turns to ash when the sun comes up. I remember being completely blown away at what a great concept that was, even at my young age. The other great thing that Monsters Attack! featured (and has since become an occasional lazy Halloweentime blog post for many sites) was the Jason Voorhees Body Count List. It detailed every death from the series, each one noted with a little icon, like a knife or a noose. It was the coolest thing an 8-year-old me had ever seen in a magazine.

Monsters Attack! only ran for a brief 5 issues, and Monster Party ended its run around 2000, but they are an enduring part of my youth and my adulthood. They helped to feed my interest in comics, art, monsters, humor, and horror, and I can honestly say I wouldn’t be who I am today if I didn’t read them growing up. So Monster Party and Monsters Attack!, thanks for everything!