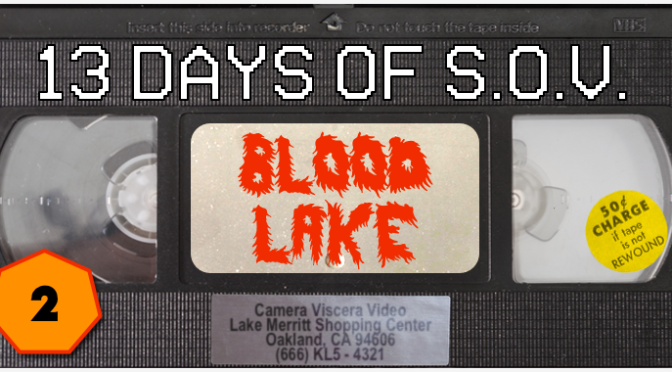 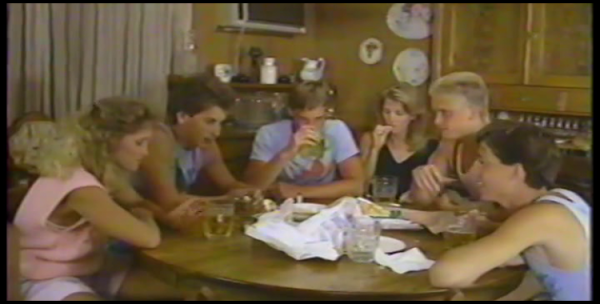 Despite there not being a whole lot of information about Blood Lake to be found online, the scant reviews I did find on various horror blogs made one thing abundantly clear: people do not like this movie. I must be in the minority, because I didn’t mind it so much!

Blood Lake is almost identical to an earlier SOV release (and one I reviewed at the beginning of my “13 Days of Shot on Video” run), Sledgehammer. Both films see a group of young kids headed to a remote cabin for a weekend getaway filled with drinking, partying, and sex. And naturally, both movies see an evil presence stalking and killing them one by one. Both movies also feature tons of unnecessarily long, drawn out shots that were most likely left unedited to pad out the run time. However, there are certain elements about Blood Lake that give it an edge over Sledgehammer.

Firstly, the kids in Blood Lake are actual kids (honestly, two of them can’t be more than 12); It’s refreshing to see a slasher where the actors who are supposed to be playing 19 and 20-year-olds are actually 19 and 20-years-old. The group of partiers in Sledgehammer tried to give off the vibe of a young, rambunctious group, but all the actors were clearly in their late-20s. And while that may seem like a minor criticism, it’s really not when you watch the two movies — the difference is remarkable.

Secondly, Sledgehammer was really hindered by it’s cramped shooting location. As I pointed out in my review of Sledgehammer, the rooms they shot in were tiny, and there wasn’t a whole lot of variety when it came to shots and angles; this repetitious shooting pattern made the film feel twice as long and extra dull. The cabin in Blood Lake, however, seems twice as big — and it’s set on a sprawling property with access to a huge lake. Sure, they recycle the same shooting locations in Blood Lake, too — but again, if you watch the movies back to back, Blood Lake‘s advantages are noticeable. 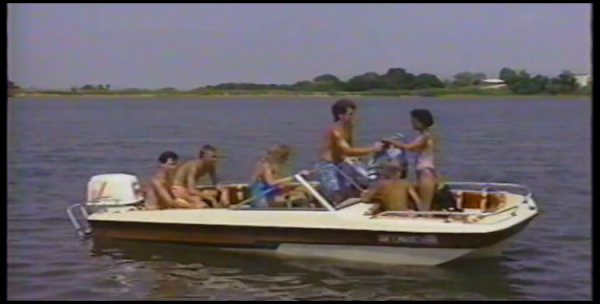 One of the first things I noticed when the movie started rolling (besides its hilarious opening pre-credits sequence where a gardener is murdered) was all of the actors’ major twang: this is a cast of true Oklahoman hillbillies! And I mean that in the best way possible. It’s not often you get to hear such heavy drawl in these SOV movies. In fact, I’d say Blood Lake actual benefits from everyone’s naturally dopey and fun-loving southern speak. It’s quite charming, really. I assure you, these lines wouldn’t be half as listenable if they were being delivered in a thick, Brooklyn accent. It just wouldn’t work.

And really, this cast does an amazing job considering they’re all a bunch of kids filming a home movie. All of the acting feels very natural; there are very few hiccups. Sure, it may sound silly to say “they acted so natural!” in a movie comprised mostly of partying, drinking, and waterskiing — but you’d be amazed at how bad some of these other SOV actors are at “playing natural”. 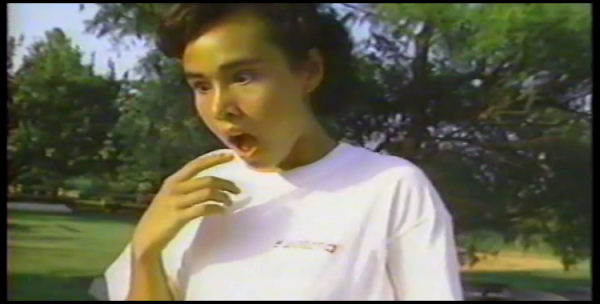 There’s not really a whole lot to say about Blood Lake, as it’s a fairly standard entry in the slasher genre — but don’t believe the haters. It’s an enjoyable movie. Hell, watching these kids drink and waterski and layout in the sun made me yearn for summer! I will say that, for a slasher, the movie is surprisingly light on violence and gore — though there is plenty of “gotcha!” moments. Also, the killer in Blood Lake is possibly one of the least threatening figures I’ve ever seen, but that may be really the only drawback.

One final thing: the movie ends with an incredibly bizarre series of shots of the movie’s killer standing on a dock by the lake…which is now completely dry. As I watched it, I thought to myself “wow, huh, I wonder how they did that”, but I also knew whatever happened was probably a natural occurrence, and the director just had to include it in the movie even though it makes no sense. Sure enough, I found a blurb online that explains how the lake bottom cracked and drained the entire thing. It just so happened to occur while the group was filming their movie. Serendipity!

Find a copy of Blood Lake and give it a watch. Drink a couple beers, turn a lamp towards your face, and you’ll feel like you’re right there with ’em.