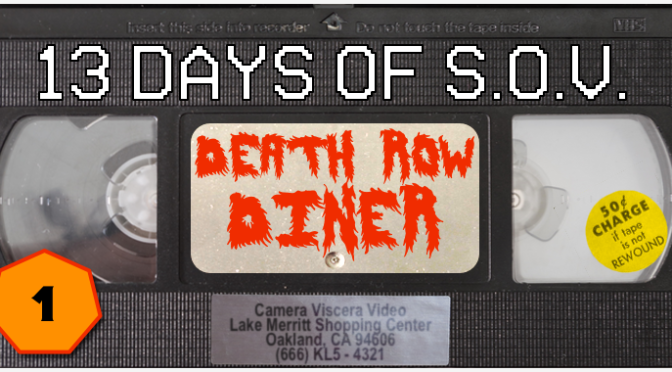 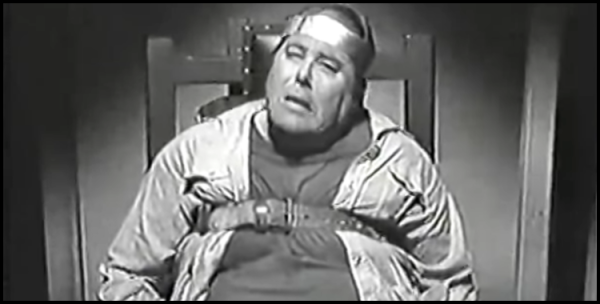 Well, the day has arrived: this is the final entry in my two week-long odyssey into the belly of the bare-bones beast, “13 Days of Shot on Video”. Honestly, it went a lot smoother than I thought it would. It wasn’t until today that I became afraid I wouldn’t make it. I know, it sounds silly to say but I really didn’t think I’d complete my final entry. I can only liken it to what I assume runners experience when they hit “the wall” miles into their marathon, right before they reach the finish line. Not only am I mentally exhausted from churning out a new review (for what are essentially identical movies) everyday for almost two weeks straight, but my tolerance for the camp and low-budget whimsy of these monsters is totally deep-fried. I’m beginning to no longer appreciate their shortcomings, which is unfair to them and makes for an impartial review. I said it before and I’ll say it again: I am in major need of a detox!

One other reason I was concerned I wouldn’t finish: it was getting increasingly difficult for me to track down honest-to-goodness SOV movies. Every list I found online that claimed to itemize “shot on video horror movies” was rampant with mistakes; many of the movies they listed were either shot on Super 8, 16mm, and 35mm, or at some point has been transferred or converted, or only included a few scenes that were SOV. This caused me to start and stop several films, which was a total pain. But thankfully I stumbled upon Death Row Diner

, a movie I’d never even heard of before, and it ended up saving the day. 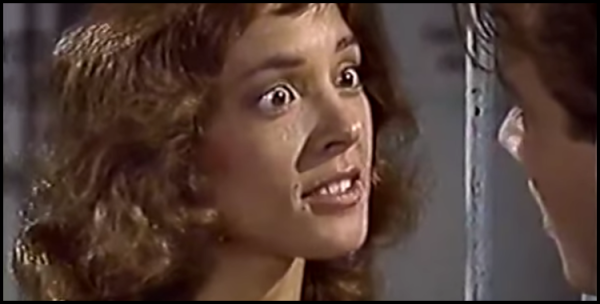 Death Row Diner begins in the late 1940s; a well-known movie executive is being put to death by electric chair after being framed for murder. As he’s being led to ol’ Sparky, he keeps complaining about how he didn’t receive his last meal. Even as he’s strapped in, he keeps begging for food, and his final words as the switch is thrown are: “I’m hungrrrryyyy!” It’s actually a pretty hilarious and promising start to the movie.

Flash forward to modern day, and his film company is still in business and hard at work in his absence. In fact, they’re filming a movie in the same prison he was executed in! Apparently his spirit isn’t too happy with the low budget crud the studio is churning out nowadays though, so he comes back from the dead and wreaks havoc on the cast and crew, killing them off one by one.

Now, the movie may sound like a straight up horror film, but I assure you it is anything but. It’s full of jokes and bizarre humor, and it even explicitly references Hollywood Chainsaw Hookers at several points (some reviews have pointed out that this movie, which was released by Camp Motion Pictures, is essentially one big promo for several Camp Motion Pictures releases.) One of the leads (the new exec) has this heavy brooklyn accent and a “don’t give me no shit” type of attitude that kept reminding me of the great and under-appreciated James Loriz, and it just added to the overall joke factor of the movie. 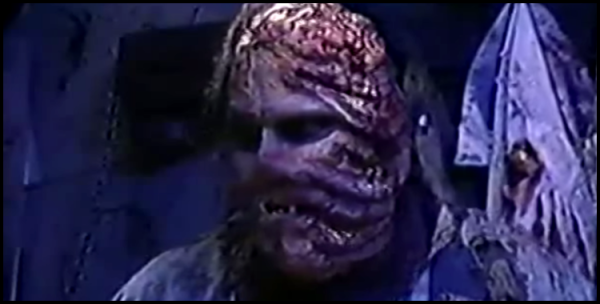 One thing I wanna point out is what a genuinely good and believable actress Michelle Bauer is in this. She’s so likable and sweet, even when she’s playing the catty, cheating wife. The b-actresses of the 70s and 80s blow the modern b’s out of the water, man. It’s not even a contest. It feels like these actresses from back then shouldn’t have even been considered “b-actresses”; the more movies I see, the more I think that nomenclature was chosen solely on the fact that these actresses were willing to bare it all. But I digress. Michelle does an awesome job and pretty much carries the movie.

Ultimately, the movie ends up being fairly uneven — the humor shifts between really dumb groan-inducing stuff to actually funny, weird and enjoyable. And like every SOV movie I’ve watched, it drags like a sonofabitch, even though it clocks in at only an hour long. There is some okay gore and make-up in the movie, and there is a GREAT death scene at a ping pong table. Aside from it’s bizarre humor, it’s a fairly typical, standard entry in the sub-genre.

Lastly, there are some really funny bloopers during the closing credits that almost mirror the same fictional snafus the “crew” was experiencing “on set” while filming the movie (within this movie) exactly. It’s a pretty fun way to close out the picture.

A gigantic, massive thank you to everyone who has read these and followed along! I enjoyed doing them, and I hope you enjoyed reading them. Your support is really truly appreciated. That’s all for now — let’s see what next October brings!