As someone who reviews horror movies on the reg (that’s ‘regular’ for you lame-os out there) it’s really important that I see as many horror movies as I can, whether it be at home or in the theater. However, like most normal civilized human beings I have the typical 40 hour work week with the occasional hobby and scant social interaction tossed into the mix. This means I have to be particularly selective about the movies I do see when I get the chance. I know that doesn’t sound very impartial or objective, but it’s all about logic: I stick to stuff I have a specific interest in (crime, suspense, psychological stuff) and I avoid the shit I hate (hauntings, found footage, mumblegore), and for the most part it works out in my favor; I end up seeing movies that I end up liking. Occasionally I’m thrown a wildcard, like a movie I should like but have reservations about (Cooties, for example), but trusting my gut has never failed me me once and my batting average for “think it looked like crap and, surprise, it ended up being crap” is near flawless. (For those wondering, yes, I ended up watching Cooties despite my better judgment and, of course, I ended up disliking it.)

Occasionally, I’ll find myself recommended something that’s even harder to crack than the sporadic wildcard: the complete question mark. A movie I’ve never heard of, never seen a trailer for, know absolutely nothing about. These occasions are rare, and seeing as my movie watching time has to be spent as wisely as possible, I usually avoid these unknown flicks. But every now and then I find myself feeling impulsive, and I take a chance on one. Thankfully, luckily, I’ve had a lot of decent-to-great experiences with these types of movies: Stung, Circle, The Canal and Spring are all movies I took a chance on and ended up liking or loving.

Enter Kristy, a movie I knew absolutely nothing about but saw people talking about on social media. I was intrigued, had nothing to do before bed last week, and decided what the hell — let’s give Kristy a day in court. 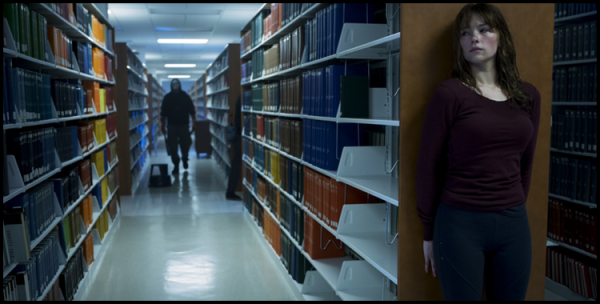 And I really liked it! In fact, I’d go so far as to say I loved the first two acts. The third act is fine, but the first 3/4 of the movie are where it’s really at.

The film follows Justine (Haley Bennett), a hard working college student who finds herself alone on campus for the Thanksgiving holiday; her boyfriend is forced to go home to see his family, and her roommate — who she’d planned on spending the weekend with — ends up bailing at the last minute to go home, too. But Justine doesn’t let it get her down: she listens to music, dances down the empty halls, and makes a run to the nearest convenience store for junk food. While at the store, she crosses paths with a creepy girl who ends up threatening her. Undeterred, Justine heads back to campus with her snacks and posts up in her room. Soon, however, she finds herself being hunted by several mysterious masked intruders who keep calling her “Kristy”.

I think one of the reasons I liked Kristy so much was that it puts a spin on one of my favorite genres: home invasion. Only here, instead of a two-story, three-bedroom home that’s being invaded, it’s the dorm rooms and pretty much the entire college campus that’s being invaded. I’ve read some reviews where people compare Kristy to the excellent French home invasion flick Ils (aka Them), and I can kind of see it — very similar in their cat-and-mouse approach.

The other reason I loved this movie was its atmosphere. I say this with complete confidence: Kristy has some of the best horror atmosphere in a movie I’ve seen all year. It’s right up there with It Follows in terms of making the viewer feel totally creeped out and unsettled, the utter dread is absolutely palpable. Since it’s the holiday weekend, the campus is a complete ghost town. And the lights in the dorm room halls keep cutting off and on because, well, that’s what lights do when there are no maintenance people to make sure they stay on (as someone who worked nights for years in an office building, I can attest: the lights would suddenly just cut off every night around 9pm, and I’d find myself sitting alone in a giant office, in the dark. But I digress.) Plus, because it’s the fall, the campus rainy and foggy. And the filmmakers also do a great job of playing up the confusing, maze-like aspect of all the dorm halls and zig-zagging corridors. As I mentioned earlier, I watched this before bed one night with all the lights off, and I truly felt uneasy at several points. I’m telling you: Kristy nails it with the horror atmosphere. 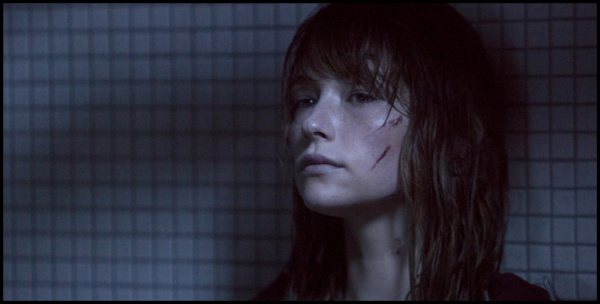 Another great part about the movie is its lead, Haley Bennett. I had never seen her in anything before (at least, not that I remembered), but I was really impressed with not only her performance but her portrayal of the character — one who goes from bored college student to heroine fighting for survival. She’s really the focus of the movie, and she totally enjoyable to watch. I got kind of a young Caroline Williams vibe from her (but hell maybe that’s just because I’m obsessed with Caroline Williams.) Also, writer Anthony Jaswinski did a great job of fleshing out a character who does literally everything she possibly can to survive and escape the deranged people who are after her. She’s not some screaming ninny, some one-note trope who keeps doing dumbs things and yet still survives somehow. Jaswinski created a character who thinks, reacts, runs, fights to avoid danger.

My one criticism: the cult-like angles the movie tries to involve — and all the “Kristy” bullstuff — in the end, absolutely none of it matters. None of it makes the movie scarier, or more interesting, or more clever. It’s an unnecessary angle that will elicit one of two reactions from the viewer: eye-rolling or head-scratching. If you watch this movie — and I highly recommend you do — just glance over that silly fluff and know one thing: you’re going to be watching a solid cat-and-mouse invasion flick with tons of great atmosphere and spooky stuff, with a great tough-as-nails heroine as the lead. You don’t need much more than that.