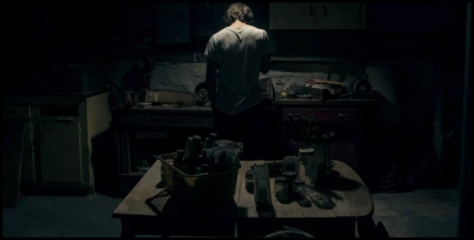 On his way home from work, Christian bumps into an old friend, Wyatt, who he hasn’t seen in awhile. They do the small talk bit: Christian’s life is going well and he doesn’t hesitate to make it known; Wyatt’s life, not so much, so he does the whole “Oh, me? Oh, yeah, everything’s great. I’m GREAT. Why am I holding these two suitcases? Oh, well…” thing. Before you can say this never happens in real life, Wyatt is up in Christian’s apartment making himself cozy, but, y’know, not too cozy – he continually insists “Hey man, I’ll just grab my stuff and go…” 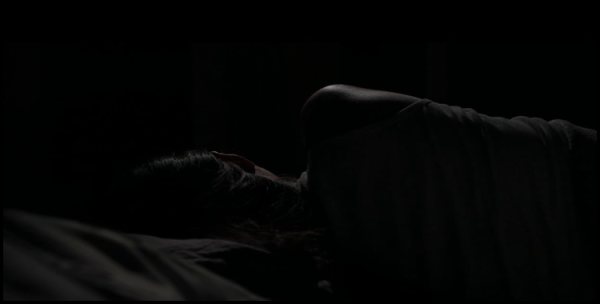 But Christian won’t hear any of it. He makes Wyatt a key, and allows him to come and go as he pleases. We find out that since they’ve last spoken, they’ve both lost the women in their lives, but that’s about where the similarities end for the two. A lot has changed between them – in fact, their lives have had completely different trajectories. Christian is a fitness nut with questionable self-esteem, and he has a crush on his boss at his fancy office job. Wyatt, however, seems to be a few beers short of a six-pack. He’s grizzled and wide-eyed. He’s hearing things, like flies buzzing, and he’s seeing things, too – certain people seem to freak him out. The strange thing is that about 20 minutes into the movie, I, too, was hearing things – a tiny voice in the back of my head, saying “C’mon, should we really keep watching this?”

It’s apparent pretty quickly that They Look Like People is a very low-budget endeavor. I’d go so far as to say no budget endeavor. (It’s mostly shot handheld – it’s quite jerky and bumpy – and there are several sections of the movie where it’s painfully clear the dialogue was dubbed in after the fact.) But, as with all low-budget movies, I’m willing to ignore these minor speed-bumps because they’re technical: I understand indies don’t always have the money to pull off smooth shots and clean audio. However, good writing is free – so when the writing is subpar, it’s a little harder to ignore/forgive.

They Look Like People takes an interesting premise – one dealing with old friendships, adulthood, mental illness, unsuspected dangers, and possibly even real monsters – and squanders it, unfortunately. There’s a lot to work with here, but for most of its brief 79 minute runtime the movie feels like it’s treading water, which is really frustrating. I kept wanting, expecting something – anything – to happen, but in the end it just ended up being a lot of repetition and very little payoff.

Director Perry Blackshear is a one-man show here: he also wrote, produced, shot, and edited the movie – and while I’m sure this was all for budgetary reasons, it ends up really hurting the film: while all of those individual elements are okay in the final product, none of them are particularly strong. The movie often feels at odds with itself. It almost seems as if it was made by two different people. Some of the movie is beautifully and eerily captured (for example, the incredibly promising opening), with flawlessly delivered lines and genuine tension – but then other times, the shots are off, the audio is butchered, the acting is icky and the writing is passable at best. Blackshear is spread thin here, and it shows.

The exciting thing about They Look Like People is that it displays a lot of promise. The parts are there, they just need to be honed and filed razor sharp. Hopefully Blackshear’s next project will see him with a larger and more adept crew to help take the load off his shoulders and allow him to focus on one aspect of the filmmaking process.