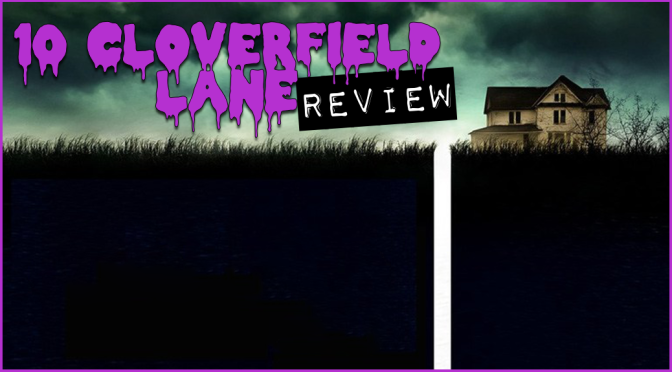 10 Cloverfield Lane is a weird movie.

I finished watching it approximately three hours ago; afterwards I discussed it over beers with the friends who accompanied me, and then I thought about it on the long walk home alone. And now here I sit typing up this review, and still the best and most accurate word I can use to describe it is weird. I totally enjoyed about 94% of it. But still: weird.

For those living under a rock or visiting from a different planet (in which case, welcome), there has been a lot of buzz (and, dare I say that vulgar word, hype) over the past few months surrounding 10 Cloverfield Lane. And I say “past few months” literally because, prior to the second week of January, there hadn’t been so much as a peep about a Cloverfield sequel. I mean, nothing. For the last 8 years, fans of the original had been offered – at best – a maybe regarding a sequel, and that was coming directly from the Cloverfield camp, specifically J.J. Abrams and Matt Reeves. In fact, it pretty much seemed like a dead issue — that is, until, audiences who went to see Michael Bay’s 13 Hours: The Secret Soldiers of Benghazi in January were delivered one hell of a surprise: a teaser trailer for a movie entitled 10 Cloverfield Lane.

In the two months since then, there have been in depth trailer dissections, recaps of the original Cloverfield marketing frenzy, and exposés that revealed the truth behind this supposed sequel (warning: that link is one big ol’ spoiler). In addition to the input from the fanatical fans, there was official word on 10 Cloverfield Lane directly from J.J. Abrams himself: it wasn’t a sequel – it was a “blood relative“. So, yes, there was a lot of hype and speculation surrounding this movie, and that’s part of what makes it fun. It was the same exact formula that worked so well for Cloverfield: drop a surprise trailer on an unsuspecting audience, let them dig up the clues, have them psych themselves up for the movie, and finally have them see the movie and have their minds blown. A fully-immersive experience which adds to the overall reception and enjoyment of the final product.

Alas, lightning rarely strikes twice, and 10 Cloverfield Lane isn’t able to achieve the same amazing ‘whole package’ approach that the original film did. In fact, I’d even say the viral marketing for this movie is tenuous at best – but I won’t go into it because I don’t want to spoil or reveal anything about the movie.

And that brings me to my point: it’s almost impossible to review this movie on its own merits. The whole experience has to be reviewed – from the teaser trailer, to the hidden viral marketing, to the analysis and speculations, to the hype and word of mouth, to the history of the original Cloverfield, to the actual content of this ‘blood relative’. It all has to be taken into consideration in order to fairly and astutely judge the final product. Having the word “Cloverfield” in the title puts an enormous amount of pressure on the film and fills the audience with all sorts of expectations before they even set foot in the theater.

That’s all I’m going to say concerning the Cloverfield-iness of 10 Cloverfield Lane. Now I’ll try to review what’s left of the movie.

As a movie – as its own movie – it’s almost great. A quick rundown for those unaware: Michelle (Mary Elizabeth Winstead) has a car accident and wakes up to find herself chained to a pipe in some underground bunker. The fallout shelter belongs to Howard (John Goodman), the man who rescued Michelle from the wreckage. Howard informs her there has been some sort of military-inspired nuclear holocaust above ground and that there are no survivors. Michelle has major doubts and reservations about Howard’s claims, but she soon discovers another survivor in the bunker, a young guy named Emmet (John Gallagher, Jr.), who backs up Howard’s wild assertions.

Goodman, as always, is a knockout. His cautious, ticking timebomb ‘Howard’ is unpredictable and terrifying. He charms you with his droopy bulldog expressions, and you want to trust him, but you’re never sure if it’s safe to. Winstead’s ‘Michelle’ is equally as layered. She’s resilient and resourceful and tough. But she, like the audience, is also understandably skeptical of her situation. Gallagher plays the likable good ol’ boy Emmet incredibly muted, but to be fair, it’s not really his movie: this is all Winstead and Goodman. However, they’re the perfect trio to be trapped together below ground – the gruff weirdo, the injured (attractive) victim, and the average Joe good guy – to create a real sense of tension and unease. Add to that a little suspicion and a dash of deception, and you’ve got yourself a great character study.

For everything I didn’t like about the movie (which, to be fair makes up for very little screen time but equates to something much larger when all the aforementioned hype is taken into consideration), I still thought it was a good movie, and really enjoyable, and it’s one of the most commanding films I’ve watched with an audience in a long time: when the third acts starts to kick into gear – when our three leads are finally laying their cards on the table with each other – you could hear a pin drop in the theater. Absolutely breathless silence. I haven’t experienced that in a theater in a long, long time – and that’s gotta count for something