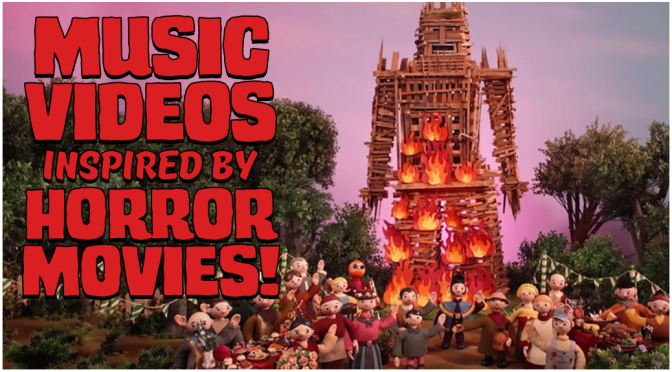 Yesterday saw the release of the hotly anticipated new Radiohead tune “Burn the Witch“, as well as a music video to go with it. And what a (timely) video it was: using claymation, the story pays homage to the May Day-centered cult horror film, The Wicker Man. The police investigation, the weird townspeople, the fruit, and even the titular wicker man – it’s all there in pliable Newplast, set to the haunting warble of Thom Yorke.

Now, music videos using old films as inspiration is nothing new, but it got me thinking about music videos that had used horror films as inspiration (this is a horror site, after all), and while a few immediately came to mind I still had to do a little digging, which uncovered a few more that I had just plain forgotten about – or in some cases, didn’t even realize were an homage!

So without further ado, here are 10 music videos inspired by famous fright flicks.

This video was only released a few months ago and quickly made the rounds through the horror-sphere, with every geek-in-the-know saying, “Look! Possession! Phantasm!” If prior to this video coming out you’d have asked me if I thought A.) a music video from a well-known band would ever pay homage to something as esoteric and polarizing as Andrzej Żuławski’s Possession and to a lesser-but-equally-as-niche extent, Don Coscarelli’s Phantasm, and that B.) the odd pairing would actually work, I’d say no way. No way, man. Never happen. Alas!

Vying for the title of “most mid-’90s thing ever”, industrial alt-rockers Garbage were so inspired by the title sequence from Seven, they just had to star in their own music video emulating the movie’s opening credits. Fun fact: Seven was directed by David Fincher, who got his start directing music videos for the likes of Paula Abdul and Madonna; the “Stupid Girl” video was directed by Samuel Bayer (director of the iconic Nirvana video for “Smells Like Teen Spirit”), who made his film directorial debut with the attractive-but-atrocious A Nightmare on Elm Street reboot.

Some of us are old enough to remember when Foo Fighters weren’t “dad rock”, they were just “rock”. After Nirvana dissolved, drummer Dave Grohl started a new band – Foo Fighters – and they were fun and quirky and had some punk undertones (Pat Smear was their guitarist, for cry-eye!) And they made great videos, too – who can forget their Mentos commercial-inspired, “Big Me”? (Note to self: write article on music videos inspired by commercials.) Anyway, Foo Fighters eventually worked with Michel Gondry (Eternal Sunshine of the Spotless Mind) on their video for “Everlong”. Gondry, known for his surreal images, really showcases his appreciation for film history here, with references ranging from German Expressionism to ’80s b-horror movies, like Evil Dead.

One year before Gus Van Sant directed the completely unnecessary shot-for-shot remake of Alfred Hitchcock’s Psycho, experimental funk metal band Faith No More beat him to the punch with a video for their song, “Last Cup of Sorrow”, which is an identical (albeit much shorter) retelling of the master of suspense’s Vertigo, with lead singer Mike Patton playing the part of Jimmy Stewart, and Jennifer Jason Leigh in the Kim Novak role!

JP, Chrissie & The Fairground Boys – “If You Let Me” / Let the Right One In

I know absolutely nothing about JPC&tFGB, other than the ‘Chrissie’ of their incredibly long band name is Chrissie Hynde of The Pretenders fame, and that’s worth a lot of cool points right there. The music video for their single, “If You Let Me”, earns them additional cool points for paying homage to the Swedish vampire kid flick, Let the Right One In. The music and visuals make for an odd pairing, but seeing as Let the Right One In is one of my favorite vampire flicks, JP, Chrissie…and hell, even those Fairground Boys, get a pass.

Director Brian De Palma’s Carrie (based on the Stephen King book, of course) contains possibly one of the most iconic horror scenes ever captured on celluloid – the pig’s blood scene. C’mon, we all know it. So, naturally, it’s been copied, repeated, and emulated to death in all outlets of pop culture. However, the marriage between the hazy, retro prom footage and Frankie Rose & the Outs’ dreamy bubblegum girl-group sound is a perfect match, and is easily one of the better homages to Carrie.

Blur – “The Universal” / A Clockwork Orange

Like the aforementioned Carrie, Kubrick’s A Clockwork Orange (also based on a book, by Anthony Burgess), has seen its fair share of visual tributes. But who better to recreate the group of playful, smart-assed, fashionable Brits than a group of playful, smart-assed, fashionable Brits? This video is noticeably light on the dystopian terror, and there’s no heroin-milk or ceramic phalli to be found, so it’s probably the version you’ll wanna watch if granny is in the room.

No list about music videos inspired by horror movies would be complete without including the walking corpse himself, Rob Zombie. In fact, all of Zombie’s music videos – and really, just everything about Zombie in general – is an homage to horror film. He’s one, big walking accolade. I bet when he sleeps, his snoring sounds like the last length of film flickering off the reel. Anyway. Zombie avoids his usual flair for ’70s grindhouse exploitation, and instead pays tribute to the silent German Expressionist flick, The Cabinet of Dr. Caligari.

One of my favorite music videos of the last few years, The Menzingers’ “I Don’t Wanna…” makes woodland maniac Jason Voorhees an empathetic character by turning him into a lovestruck lug. Determined to better himself, Jason gets a job, starts hitting the gym, and in a wonderfully meta moment stands outside the window of the girl he loves, holding a boombox above his head. This is easily the loosest interpretation on the list, merely using the recognizable Jason character to drive its storyline – but far and away it’s the entry that has the most fun with its subject matter.

Ludacris – “How Low” / Every horror movie ever

I’m only slightly kidding when I say this video pays homage to every horror movie ever: Candyman, Poltergeist, Friday the 13th, The Fog, The Ring, Paranormal Activity, The Shining. If you can sit through the incessant chipmunk vocals (I’m sure those who spend every weekend at the roller-rink won’t even notice), it’s actually kind of fun trying to spot all the nods and influences. Make no mistake, this is the granddaddy of music videos inspired by horror movies.

There you go, 10 music videos inspired by famous fright flicks! Have a favorite? Perhaps one I didn’t include here? Lemme know below!