It was announced yesterday that the long-gestating remake of The Crow had finally found its lead in Games of Thrones actor Jason Momoa. I’m only vaguely familiar with Momoa’s work, but the shoes of the jester-faced, star-crossed lover Eric Draven would not be easy ones to fill considering Brandon Lee’s mesmerizing and emotional original portrayal of the character, one that was only heightened and immortalized by his untimely death on set, the result of a freak accident while filming a scene for the movie.

But besides the deck already being stacked against Momoa, something immediately struck me as off about this casting choice. For those unaware, this is what Jason Momoa looks like: 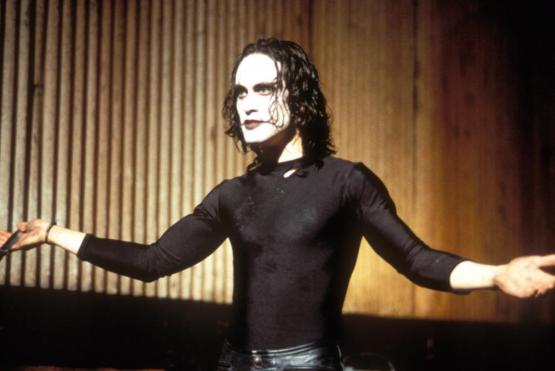 That above picture of Momoa is from when he played Conan in the Conan the Barbarian remake. You remember who originally played Conan, right?: 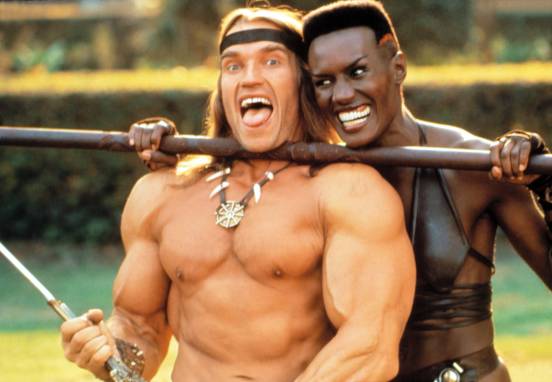 So someone who was cast as the modern-day equivalent of Arnold Schwarzenegger was also cast to play the sinewy, cat-like character Eric Draven. Essentially, Schwarzenegger in The Crow. One more time, here’s a side-by-side of Brandon Lee in The Crow and Jason Momoa on vacation:

To be fair, I don’t know what Momoa is going to look like in The Crow. It’s possible he’ll go full method and hole himself up in some dingy NYC apartment, subsisting off a single daily bowl of ramen noodles while listening to 1994-era Stone Temple Pilots on repeat. It’s possible, but highly unlikely.

Hollywood’s mystifying bulkification of characters isn’t anything new. Just a few months ago, it was announced that Dwayne “The Rock” Johnson had been cast in the Big Trouble in Little China remake as Jack Burton, a role originally made famous by Kurt Russell. Again, a side-by-side comparison:

Now, there’s no doubt in my mind that Momoa and Johnson will do great in their respective roles. (I love The Rock, truly. I mean, how could you not? Dude’s got major charm and appeal in everything he stars.) But this isn’t about them as actors or their performances, it’s about how the characters they’re playing are presented on-screen.

Both Eric Draven and Jack Burton are presented in their original respective films as ordinary, unassertive schmoes to a fault. In fact, it’s because of their ordinary-ness that the each film’s plot is able to move past the first act.

In the opening scenes of The Crow, Draven is established as a gentle romantic, so unassuming that he’s easily bested by a couple strung-out drug dealers who break into his apartment. In Big Trouble, Jack Burton is a boozy, card-playing truck driver who suddenly finds himself in way over his head when confronted by a mystical Chinese street gang. Russell has even described Burton as, “Not a hero; a screw-up. Falls on his ass as much as he comes through.”

Now, look at Momoa and Johnson. Does Momoa look like he’d have trouble defending his fiancée from a couple scrawny hopheads? Does Johnson look like he’d have trouble saving a girl from some karate-chopping dudes? I’m willing to suspend disbelief when it comes to magic old men with glowing eyes or birds that are able to bring people back from the dead, but when I look at Momoa and Johnson, I see superheroes. I see one guy built like a refrigerator and one built like a mountain. It’s hard to suspend disbelief when the good guys are ten times bigger than the bad guys.

Look, Momoa and Johnson have their place: in over the top action films where their characters are allowed — hell, encouraged — to be bigger than life. Like Schwarzenegger in Commando, or Stallone First Blood, we all wanna see the big muscular good guy kick everyone’s ass and save the day. But there’s a little more subtlety (and, dare I say, “nuance”) to a film like The Crow, which is clearly not even in the same realm as those “shoot first, ask questions later”-type movies.

The reason I bring all of this up is because it’s something that has plagued horror movies – specifically horror sequels and remakes – for a long time now. As a few horror film series’ have progressed, the main villains have – for some reason – gotten bigger. I’ve never understood it, and I’ve never liked it, and seeing the sort of “bigger is better!” mentality seep into other genres (especially something like The Crow) makes me scrunch up my nose.

Take, for example, the original Halloween. Michael Myers is slight and specter-like. Even while walking around the streets of Haddonfield in a white mask, he’s meant to go unnoticed, to not stand out. Dick Warlock, the actor who played Myers in Halloween II, is 5’9″. However, Tyler Mane, the actor who played Myers in Rob Zombie’s Halloween remake, is fucking 6’8″! What the fuck, man! But honestly, I’m genuinely curious: what’s the logic behind a choice like that? “I know how to make him scarier! Make him taller.”

Look at the Friday the 13th series. Since Jason’s first appearance in the sequel, the actors have gotten bigger and bulkier. By the time the series had reached Jason Goes to Hell, Voorhees looked like a goddamn wrestler. (And don’t even get me started on Uber Jason.) How come Jason continued to get bigger even though he was a rotting corpse? Again, I can only suspend so much disbelief. But I digress. Warrington Gillette, the original Jason Voorhees, is 6’1″. Derek Mears, who would go on to portray Voorhees in the 2009 remake, is 6’5″. Is the logic here that a machete-wielding dude in a hockey mask isn’t scary if he’s of average height? You can see the evolution of Jason-portrayers in this photo:

In supplemental material for the Friday the 13th remake, I remember hearing actor Jared Padalecki state that he “had to work out” extra hard so that the final battle between he and Jason would look like “a fair fight”. Seems like a lot of trouble for nothing, if you ask me.

Last but not least, The Texas Chain Saw Massacre. How would you describe original Leatherface, the late Gunnar Hansen? “Big”? “Rotund”? “Heavy”? “Imposing”? But you probably wouldn’t refer to him as “‘roided out” or “muscle-bound” or “ripped”, right? And yet…

They got some fucking asshole who looks like walking Human Growth Hormone to play ol’ Bubba in the Texas Chainsaw Massacre remake (and its sequel).

Now, again – Hodder, Mears, Mane – this is nothing against them as actors or their portrayals of their respective characters. In fact, it has absolutely nothing to do with them at all and everything to do with the directors, producers, and casting agents who think this is a good thing. I do not understand this fascination – nay, obsession – with making villains bigger, bulkier, and more muscular. Filmmakers, I assure you: a masked dude brandishing a weapon is terrifying in its own right, and his height has absolutely no bearing on that.

Do big and bulky baddies have their place in horror? Of course they do! If, y’know, it makes sense why they’re big and bulky. But just making a horror villain – especially an established one – look like he’s been hitting the gym five times a week? I don’t see a point. For what it’s worth, I think scrawny creeps – Doug Jones and Javier Botet, for example – are far more visually striking than a mound of muscle. I mean, what’s scary about that?

6 thoughts on “RANTS: WHY SO BULKY? Bigger Isn’t Always Badder”