Full disclosure: I don’t like Cadbury Creme Eggs. In fact, I don’t think I’ve ever eaten one, so maybe it’s unfair of me to say I don’t like them. As a kid, I genuinely thought it was a chocolate covered egg yolk/albumen, and that thought sickened me. So, naturally, I avoided them.

Here’s a funny story: In fifth grade, our teacher sprang an unexpected assignment on the class. “The first three people to turn in their papers,” he declared, “will get a surprise.” Of course, I just had to have that surprise, and being the little overachiever I was (a trait which waved bye-bye to me long ago), I actually finished first. I trotted up to my teacher’s desk, paper in hand, and eagerly awaited my surprise. He examined my work, gave an approving grunt, and then as if he’d suddenly remembered what he’d promised, frazzedly began rifling through his desk drawers, in search of the surprise he’d clearly fabricated in order to get the class to finish the assignment.

“Ah, here you go,” he said. From the top drawer of his desk, he produced an out-of-season Cadbury Creme Egg; dinged, dented, and flakes of foil peeled back and missing. This was my surprise. He handed me the egg (which, at the time, I think I still believed was a real egg), and sent me back to my desk. Talk about feeling scammed!

This is all to say that I really don’t have much to compare Cadbury’s spooky “Screme Egg” to. From the outside, it looks like a regular old Cadbury Creme Egg, the recognizable star shape stamped into the side of the chocolate shell. The inside of the Screme, however, is much cooler than a regular Creme: instead of yellow and white innards (barf), we get green and white innards! (Cool!)

The whiteness of the goo is a tad pearlescent, which is sort of pretty for a candy. When it got melty and mixed with the slime green, it created this minty color which looked like toothpaste. (Same consistency, too.) As for its flavor: straight-forward sugary vanilla, how I imagine it would taste eating a Yankee Candle.

All in all, a simple yet fun twist on the Easter treat. 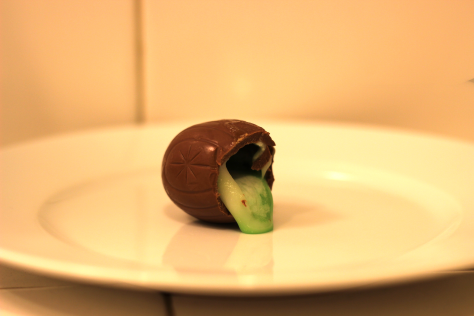