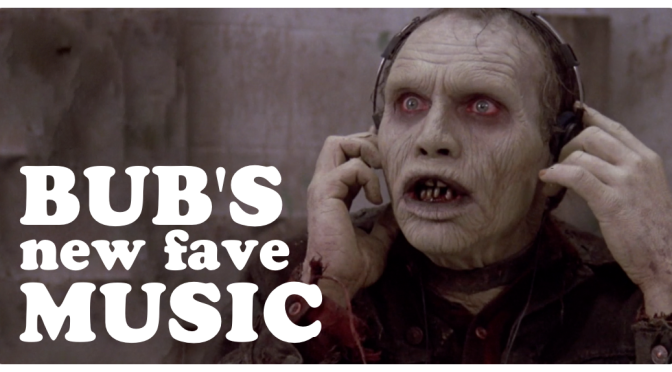 One of the great things about 80s horror flicks (versus today’s pedigree) is they didn’t take themselves so seriously. They weren’t afraid to inject lots of humor right alongside the buckets of blood. Everything from Evil Dead to Creepshow, A Nightmare on Elm Street to The Lost Boys, there was an art to the balance of humor and horror – something that is most certainly lost on 99.98% of today’s spook movies.

George A. Romero was no stranger to having fun in his movies, especially them zombie ones that made him so famous. Hell, Dawn of the Dead (1978) has a pie fight! By his third zombie film, Day of the Dead (1985), the slapstick got toned down a bit but there was still lots to smirk at – one of the main ones being the childlike “Bub”, a zombie who we see being ‘taught’ by Dr. Logan. Bub is iconic, as are his interactions with Dr. “Frankenstein” Logan, so I thought I would take a familiar scene and update it a bit – contemporize it for the year it was released, 1985.