Last September, Blumhouse’s Ryan Turek and Bearded Lady’s Mystic Museum, an oddity shop in Burbank, CA, teamed up to bring Slashback Video—an ode to the mom & pop video shop of yore, specifically their worshipped horror aisles—to screaming, vivid life. It was a massive success, and I was lucky enough to be there opening night. Let me assure you, the second I stepped through the threshold, I was suddenly 8-years-old again—zapped back to the small Midwestern video shops I’d frequent with my parents, and the horror aisles I’d spend the whole time exploring.

Like every great horror film from the ’80s, Slashback needed a sequel, and it got one this year, once again in September. This time, the exhibit had expanded to include laser discs and video games, enhancing its perma-nostalgia vibe.

Quirkily enough, they also released a soda! As I’d been planning to do #31DaysOfJunk for the last few months, I immediately jumped at the chance to include a sugary soft drink based around this museum show I’d enjoyed so much.

The neon yellow color of the soda made me think it would taste like Mountain Dew, obviously. And while the first sniff of the drink had “generic citrus soda” written all over, the taste is something totally different. I’d go as far as to say, “impossible to pinpoint”. Honeydew? That can’t be right, can it? Or like cream soda from another planet. Ultimately, I decided it mostly tasted like one of these popsicles. Remember those? It tastes exactly like how I remember those popsicles tasting.

Super sweet, low carbonation, and to be honest, my tongue is kinda numb after drinking it. Basically, the perfect drink for a Friday night in October of ’89, while laying on your stomach on the living room floor in front of the TV, seeing Halloween II for the first time, edited for content, commercials and all. 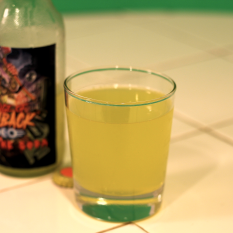 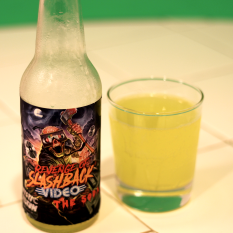