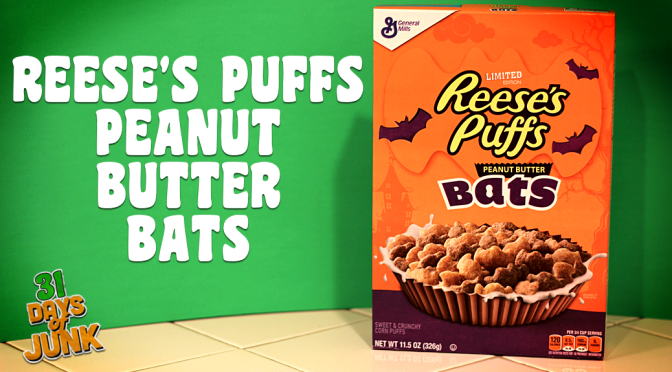 Sometimes you don’t even have to change the recipe, all you gotta do is change the color, or, in the case of Reese’s Puffs Peanut Butter Bats, change the shape.

Now, if you’ve ever eaten a bowl of Reese’s Puffs, you know what to expect. It’s one of those mouth-destroying cereals that belong in same the category as Cap’n Crunch; one bowl, and the roof of your mouth is shredded—raw and tender to the touch of your tongue. There’s also a weird, oily film which coats the cereal pieces (and in turn, the inside of your mouth). Still, even with all the oral destruction, it’s easy to put away three bowls in one sitting.

The Reese’s Puffs Peanut Butter Bats are no different. Well, they are, shape-wise. But the flavor (even the weird, oily sheen) is still the same.

Still, there’s something to be said about the way the flattened pieces somehow do less damage to the inside of one’s mouth than the standard cubelet-shaped pieces. A true miracle in cereal engineering, the flat bats just crunch easier. A more comfortable chew. It got me to wondering: is there the same amount of “material” in a bat-shaped Reese’s Puff as the cubelet-shaped Reese’s Puff? Does one have more mass than the other? Can that explain why the bat shapes are more mouth-friendly?

Too much science for me. All I know is: these taste the same as the Puffs, but your mouth won’t be hurting by bowl three.