There’s no denying it: horror anthologies are hot right now. The format has always been a popular go-to for the horror genre, but by the late-’90s it sort of fizzled out. Enter Michael Dougherty’s Trick ‘R Treat in 2007 – a Halloween anthology, naturally – and boom, the sub-genre was revitalized. Since then there’s been Chillerama (utilizing horror’s goofiest gorehound directors), the V/H/S and The ABCs of Death franchises, and even a few T.V. shows like Darknet and Black Mirror. More recently there’s been Tales of Halloween, and soon the upcoming Holidays. There’s also been a slew of lesser watched stuff that I didn’t mention, but trust me when I say: anthology-style horror is hot.

Hot as it may be, however, it’s not an easy format to pull off successfully. There are so many variables that can make or break the final product. How many segments do you include? How long is each of those segments? Are they tied together or independent of one another? And regardless of the answers those questions, you’re still stuck having to tell a cohesive story that entertains, thrills and satisfies within a truncated amount of time – anthology segments don’t have the luxury full length films do to flesh out a story. Do you include 26 segments at 4 minutes a piece (The ABCs of Death), or two hour-long stories (Two Evil Eyes)? Lots to consider.

Like the successful Trick ‘R Treat, Southbound goes the safe, sensible and engaging route by including four interconnected stories, all of which are centered around a lonely stretch of desert highway. The segments couldn’t be more different from each other – there are cults, ghosts, aliens, home invaders – and that variety helps to keep things interesting. And at only 89 minutes (leaving each segment about 17 minutes to get in and get out), the film moves quickly, so there isn’t much drag. However, since this is a film comprised of four different directors, some segments are going to be stronger than others.

The strongest of the bunch is Jailbreak, a story of a brother trying to rescue his long-missing sister from a mysterious group. It’s the most well-shot of the lot and it makes the best use of its desert environs. Plus it moves at a breakneck pace so it keeps the viewer engaged from beginning to end. The final segment, The Way In, is another solid – if not troped-out – entry. I’m a sucker for home invasion, especially if the invaders are wearing creepy masks, but it’s been done a lot in indie horror lately. Still, the masks are pretty creepy.

The weakest segments come back to back, which hinders the movie a bit. Siren sees a band whose van has broken down on the side of the road rescued by a weirdo couple. Once back at the couples’ house, the musicians see that perhaps not all is as it seems with these people. Unfortunately, there is a lot of wasted potential with this segment. The weirdo couple and their friends are ripe for exploration, but all we get from them are a few side-eyes and awkward pauses in conversation. The next section, The Accident, sees a distracted motorist hitting a girl and doing his best to save her – her life, literally in his hands. There’s almost no story here, and therefore no conflict or real solution. This segment seems to exist only to gross out the viewer, which feels cheap and easy compared to the other segments. 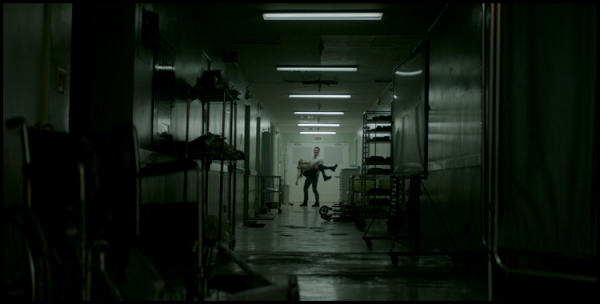 In the end, Southbound suffers from this unevenness. The good parts are enjoyable, but the bad parts are uninteresting – or worse, excisable. It’s easier to overlook shortcomings in a normal movie where a linear story is told over 90 or 120 minutes, but in a movie comprised of sections, it’s imperative that each one of those segments be successful for the overall movie to be successful. If one of those legs isn’t sturdy, the whole thing can collapse. If two of those segments are weak, that’s half the movie that’s weak.

Much like a road trip through the desert, Southbound is a bumpy ride – one filled with occasional stretches of sights to behold followed by equal amounts of uneventful nothingness.