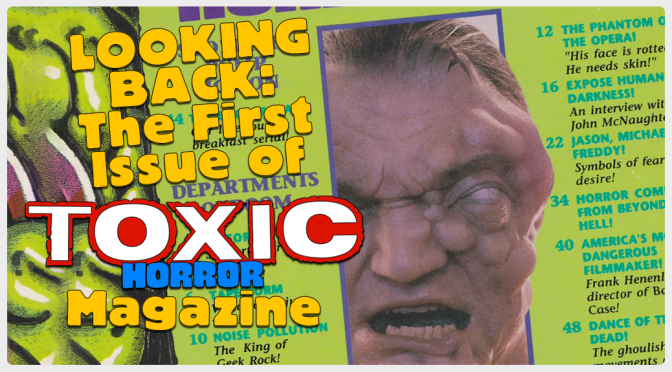 In the late-’50s, when the Universal Monsters were wrapping up their run and giant atomic monsters started to take over the horror cinema, Forrest J. Ackerman and James Warren began publishing the “world’s first monster magazine”, the highly imitable Famous Monsters of Filmland. It was, perhaps, the most important magazine concerning horror cinema ever published.

Naturally, a slew of spin-offs and copycats popped up soon afterward, all doing their best to cover what horror movies had to offer, all in a very similar style and tone.

But by the late-’70s, the type of horror that was showing at the local cineplex was vastly different than the fare that had been shown 20 years earlier: the kills were more violent, the sex completely uncensored, and the gore utterly gratuitous. The taste of the common horror fan had changed, and there needed to be a magazine which represented this new wave of cinema.

Enter Fangoria Magazine, “The First in Fright, Since 1979”.

From its debut, Fangoria pretty much dominated the horror movie magazine market. But by the mid-to-late-’80s, horror had become such a massively successful and popular genre, Fangoria decided to publish a few sister magazines to cover everything that was being released. In 1988, they debuted Gorezone Magazine (which I’ve covered before), a darker and more gruesome outlet which ran for 27 issues. And one year later, in 1989, they released the short-lived Toxic Horror. TH was canceled after just five issues.

Looking back, it’s clear that TH was the sort-of loosey-goosey experimental sibling to Fangoria’s trusted, name-brand output. Fango had fun, sure, but at times TH feels downright goofy. (Check out their fictional story, The Booger Man, below.)

Still, those of us raised on ’80s horror, we took what we could get when it came to paper mags which showcased the goopy, gory stuff. This was long before the Internet was a twinkle in Al Gore’s eye; so the more horror magazines, the better.

Without further ado, let us hop in the family car, head to the local grocery store, b-line it to the magazine aisles, and go back to 1989, where the first issue of TOXIC HORROR awaits us. Enjoy these scans from a few select pages of my own personal copy of TH #1 (and forgive any blurred edges!)

4 thoughts on “Looking Back: The First Issue of TOXIC HORROR Magazine!”