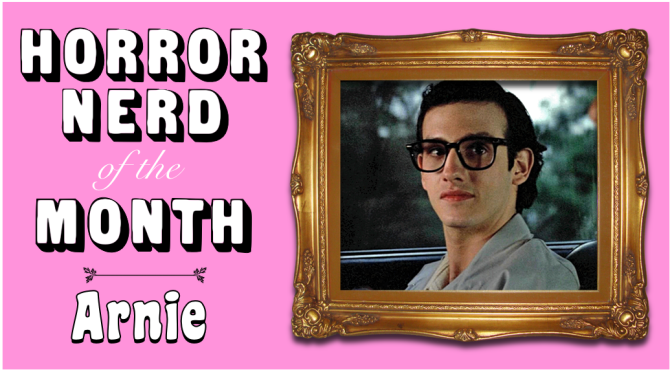 When we ‘re first introduced to our bespectacled bore, Arnie Cunningham, he’s frantically running from his house hurrying to catch his ride to school. In the process, he rips open the bag of trash he’s taking out – spilling it all over the driveway and his mother’s feet. She shoos him on, and he waddles off – arms akimbo, glasses sliding off his face – to his friend’s car. It’s the quintessential “Yes, this character is a nerd with a capital N” introduction, something that I’ve covered here before.

While Arn’s time spent as a nerd is brief before he’s ultimately transformed into the brainwashed badass who worships his ’58 Fury, Christine, the first third of the film is full of geeky goodness – like when a group of bullies jam a switchblade into his lunch bag, spilling the contents of his yogurt everywhere. (For those not in the know: packing yogurt for lunch in high school is super duper lame. Very uncool.)

Arnie, we salute you.