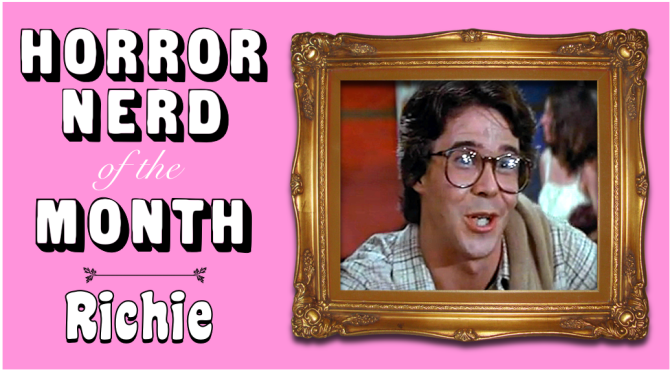 Miles Chapin’s “Richie”, from Tobe Hooper’s The Funhouse, is the perfect embodiment of the troped-out ’80s horror that was happening at the time: he’s a high schooler who looks to be in his late-20s (possibly early-30s); he’s an insufferable WASPy geek, yet has a gorgeous girlfriend; and, despite being a bespectacled lame-o, his best friend is the high school football team’s all-star quarterback, Buzz Dawson. It was the ’80s, baby. It didn’t have to make sense as long as everyone was so obnoxious that you rooted for the bad guy.

Richie is also a wannabe preppy, which makes him even more detestable. Imagine a combination of Tim Matheson’s snarky shit-eating expressions mixed with Harry Anderson’s general punchability, and you’ve got your basic Richie. Every time he opens his mouth, you just know some dumb shit is gonna come out of it. And that’s something that people often fail to realize about geeks: not all of them are smart.

Listen to any of Richie’s many knee-slappers about their high school gym teacher, Larry Latner, and you’ll immediately find yourself in Jock Mode, growling to yourself, “Must. Pummel. Spaz!”

Richie, we salute you.

One thought on “HORROR NERD OF THE MONTH: Richie!”