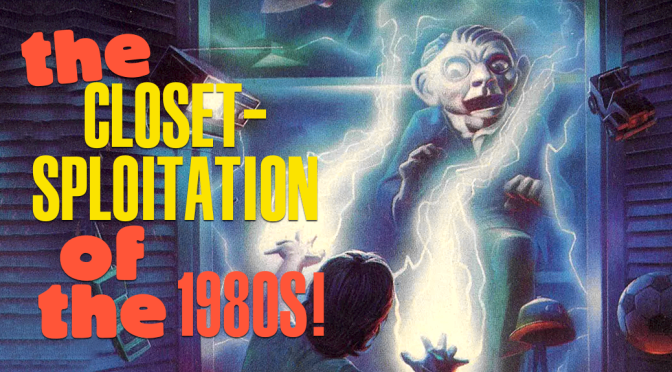 This piece originally appeared on iHorror.com.

The first apartment I ever lived in by myself overlooked a graveyard. I’m not exaggerating: you could go out on the back porch, do your best Camille Keaton impression, and literally spit on someone’s grave. So naturally, it wasn’t long before I – a horrornut living comically close to an abounding necropolis – convinced myself that the studio I had just rented was haunted by my new neighbors.

There were a few incidents early on that put this thought in my head – shelf items rearranged, the occasional unflushed toilet – but considering I was in my early 20s – and therefore often existing in a fog of inebriation – I dismissed these manifestations and chalked them up to my own doing. However, there was one thing I knew I wasn’t causing which was impossible to ignore, proof that my apartment was indeed haunted: the living room closet would occasionally smell like spaghetti.

Weird, I know. Silly, sure. But I’m telling you: that living room closet would reek of spaghetti regularly, far too often to be attributed to the downstairs neighbors’ cooking. And the smell was isolated to the closet! How do you explain that? So I assured myself it was haunted by some pasta-loving ghosts. (I liked to imagine they were stoner-type ghosts, specifically; it would explain the constant spaghetti eating and was a far more fun visual than some spooky old woman or Victorian-era child.)

And that’s the great thing about being an adult: I lived next to a graveyard, was convinced my closet was haunted, and it was all somehow very funny to me. But it’s different when you’re a kid. I can’t speak for kids today, but for me – a kid growing up in the ’80s – monsters were very much real, and their favorite places to hide were under the bed and in the closet. And Hollywood – especially during the ’80s – was acutely aware of this.

Prior to this, horror films had shown us closets were a place one might actually consider hiding from the monsters that were after us, but once the ’80s rolled around there was a proliferation of movies that made the closets themselves the genesis of evil – and made us, the viewer, want to avoid them at all costs.

In 1982, Steven Spielberg released two films that featured closets, one more prominently than the other: E.T., which he directed, and Poltergeist, which he only produced. While E.T.‘s closet dealings were charming, cute, and brief, the closet in Poltergeist was anything but. It was a literal door to Hell. Sure, the infamous staticky T.V. was spooky and all, but let’s not forget: The Freeling’s troubles really began once poor little Carol Anne was sucked into her bedroom closet. And look, once Steven Spielberg does something unique (and quite successfully, I might add), a string of imitators are guaranteed to follow. And follow they did.

Long before J.J. Abrams learned to purloin from the king, Roland Emmerich (Independence Day) was doing his best Spielberg impression with Making Contact, AKA Joey, a film littered with references to Close Encounters of the Third Kind, E.T. and Poltergeist: broken suburban family, toys that spring to life, telekinesis, creepy puppets, good vs evil. Oh, and spooky closets. Here again, the closet acts as a portal to another dimension, one wherein our lead, Joey, is able to communicate with his dead father. Watch the trailer and I’m sure you’ll agree: this is the most Spielberg movie ever made (that Spielberg didn’t actually have any involvement with).

Unlike Making Contact, Monster in the Closet is a low-budget offering (from schlockmeisters Troma) which is more spoof than imitation Spielberg, paying homage to the creature features of the ’40s and ’50s – but make no mistake, this is pure closetsploitation. The film finds a small town being terrorized by a monster who accesses their homes via their closets. The only way to stop it? Destroy every closet in town, naturally.

The beloved Fred Dekker/Shane Black film The Monster Squad sees our titular club of preadolescents saving their small town from a group of invading monsters straight off the Universal Studios backlot circa the 1930s. All the big names are present: Dracula, Frankenstein (‘s Monster), The Wolf Man, The Creature, and of course, The Mummy. Dekker – no stranger to cramming as many horror tropes as he can into his films (see: Night of the Creeps) – doesn’t miss the opportunity to insert the ol’ monster in the closet gag in Squad, with a youngster trying to convince his half-awake dad that The Mummy has taken up residence with his empty hangers.

If Making Contact is the most Spielberg movie that Spielberg never made, then Lady in White is easily a close second. It, too, features many allusions to Close Encounters, Poltergeist, and E.T. – including a scene where a kid on a bike seems to defy gravity and “fly” over a ravine. And yes, it even features an other-worldly closet, this time in a school, in which our young lead Frankie (Lukas Haas) finds himself locked after hours. It is here that he has ghostly visions of a girl being murdered by a strange man in the very same closet he’s trapped. Frankie spends the rest of the film trying to solve the crime, and revisiting the creepy closet for clues.

And finally we have Cameron’s Closet, a movie in the same vein as Making Contact and Lady in White, albeit it a tad more violent (and a lot racier). Unbeknownst to our telepathic protagonist Cameron, his favorite toy is actually a possessed Mayan doll – one that comes to life (due to Cameron’s active imagination) and begins residing in his closet. And wouldn’t you know it? The doll begins killing people who come near the closet, turning them into demon zombies. Typical. As I said, this is a bit more brutal than your average closetsploitation fare, but the Spielbergian hallmarks – telekinetic kid, toys springing to life, flashing lights – are all there. Oh, and Oscar-winning special effects maestro Carlo Rambaldi – who worked on both Close Encounters and E.T. – did the special effects for Cameron’s Closet. There’s no denying the intentions of the filmmakers.

The decade saw many other inclusions of closetsploitation – some of it brief, some of it not even in the film but merely used in the marketing. Even television shows got in on the excitement. And while there have been nods at closet horror in the decades since, nothing compares to the boom of the ’80s.

This is only a brief rundown of some of the films from that era that made our closets terrifying. Which ones am I missing? 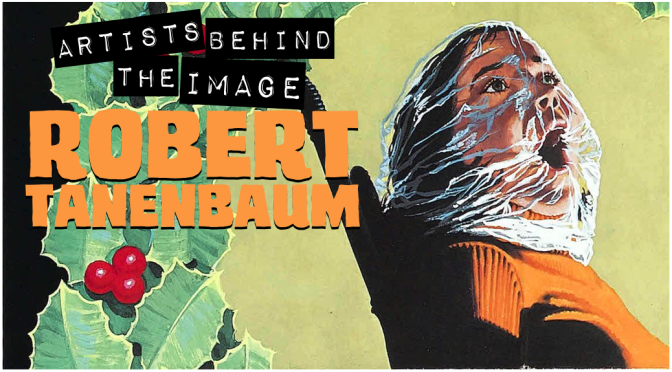 Prior to college, Robert Tanenbaum had no formal art training – but that didn’t stop him from winning first place in the portrait competition while only a freshman at Washington University. His innate talent for portraiture took off from there, and he hasn’t stopped to look back since.

Adept at watercolors, oils, and acrylics – and with a distinct style reminiscent of Norman Rockwell – Tanenbaum has been in constant demand since his career began. He’s been commissioned over 200 times to paint the portraits of various movie stars, sports figures, and even heads of corporations. He’s painted many several collections of Franklin Mint collector’s plates. He is a Signature Member of the National Watercolor Society; one of 22 members out of 1300 members to be nationally certified by The American Portrait Society;  one of only 350 that has been elected as an Artist member of the California Art Club and an artist member of National Society of Painters in Casein and Acrylic. His work has been featured in numerous magazines and art shows. END_OF_DOCUMENT_TOKEN_TO_BE_REPLACED 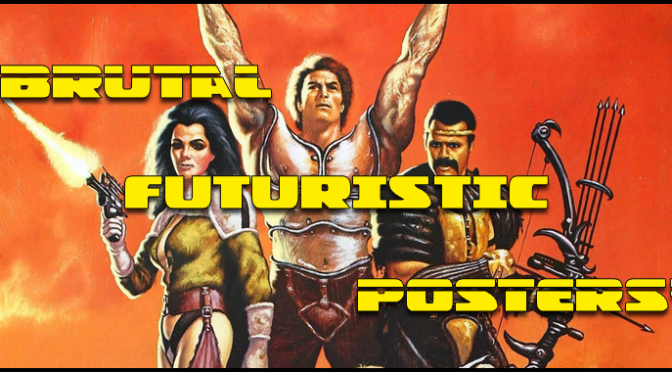 The landscape is a vast desert wasteland where madmen roam the scorched earth on sputtering motorcycles culled from spare parts and outfitted with human skulls. Or – maybe – the landscape is a trash-filled, neon-soaked city overrun with crime and violence, where drugged-out maniacs in leather gear terrorize innocent, law-abiding citizens. END_OF_DOCUMENT_TOKEN_TO_BE_REPLACED 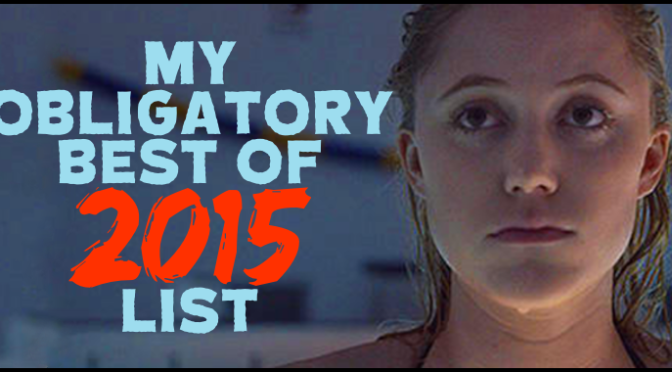 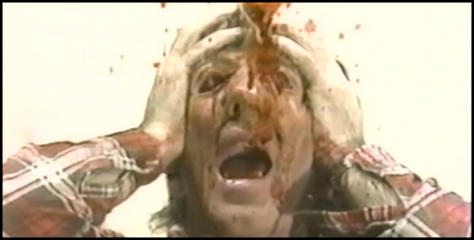 is such a singular, unique film that of course it could only be birthed during the ’80s shot-on-video boom.

In fact, it’s not much of a movie at all: in reality, it’s 90 minutes of exploitation film trailers from the ’60s and ’70s hosted by a man and his zombie puppet. The trailers are film stock, but the interstitial wraparound segments featuring the ventriloquist and his dummy are pure shot-on-video awesomeness. END_OF_DOCUMENT_TOKEN_TO_BE_REPLACED 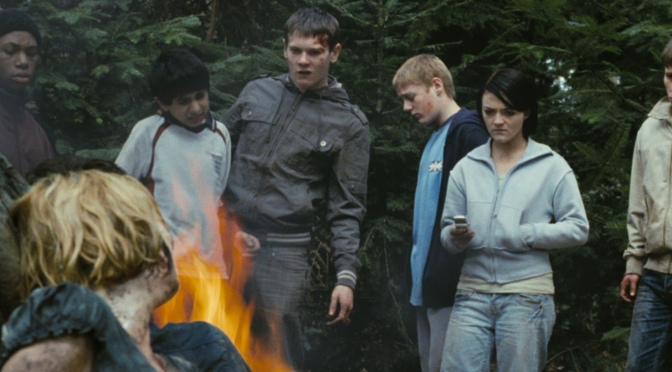 A young couple decide to take a woody retreat one weekend. While on a secluded beach, some loud and thuggish youngsters show up and blast music and let their dog run free. The young couple request that they keep it down and keep the dog leashed, to which the kids reply “you’re on our territory”. Here’s where the reversal comes in. Suddenly it’s the good guys who are invading the bad guys territory. The couple is insistent, but the young punks don’t relent. Soon it escalates well beyond what it should and all fucking hell breaks loose. The movies becomes very bad very quickly.

I really, really, really enjoyed this film. I didn’t know what to expect when I started it, nor did I realize the handsome lead was a pre-fame Michael Fassbender, but the movie is full of surprises, including the ending (which I won’t give away). The movie had me edgy the whole time, wondering what was going to happen next. It also brought to mind something that happens on a daily basis: when do you back down? When do you swallow your pride and move on? I guess you never know until you’re being chased by a group of drugged-up teens.